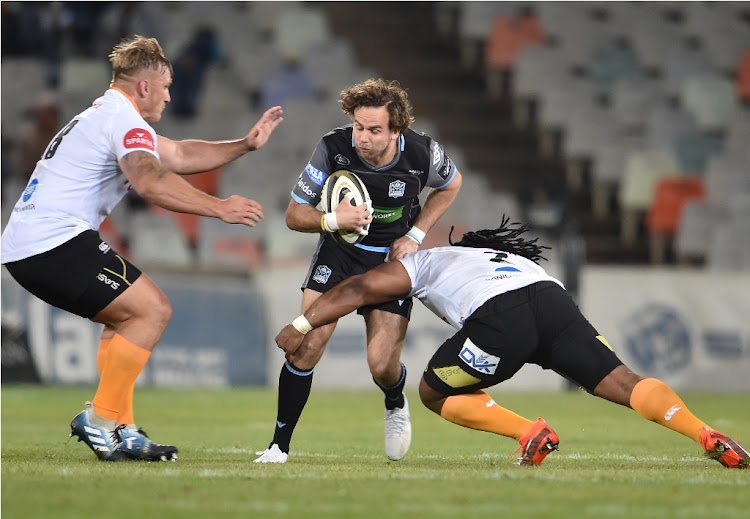 Ruaridh Jackson of the Glasgow Warriors during the Guinness Pro 14 match between Toyota Cheetahs and Warriors at Toyota Stadium on September 27 2019 in Bloemfontein.
Image: Johan Pretorius/Gallo Images

The first weekend of the 2019/20 PRO14 season was a mixture of ecstasy and pain for Cheetahs and Southern Kings, SA's two participants in the tournament.

After claiming their sixth Currie Cup title earlier this month‚ the Cheetahs continued their good form against a depleted Glasgow Warriors in Bloemfontein on Friday night.

The visitors currently have 16 players at Rugby World Cup in Japan.

The Cheetahs thrashed the men from Scotland 48-14 for their first-ever win over the Warriors in their fifth attempt.

But in Port Elizabeth is was a more disappointing story as the Cardiff Blues came from behind to beat the Kings 31-27.

The home side led for 67 minutes of the match.

The Cheetahs were scything on attack but where they showed marked improvement was in defence.

Limiting last season’s runners-up and second highest scorers to only 14 points was a good‚ early sign.

“We are still a work in progress‚ and we know that if we want to be competitive away from home‚ then a few things still need to happen‚” outgoing Cheetahs coach Franco Smith said.

When the freakishly impactful Malcolm Marx leaves the field the Springboks’ opponents might be forgiven for thinking they are being exposed to the ...
Sport
1 year ago

“I want to make it clear. We haven’t won anything yet‚ we simply had a good game. There is a lot to build on.

“We are happy with the result but there was a lot of reasons for them (the Warriors) not to be on par tonight and they will bounce back.

“The five points were important but the next two weeks will be just as important. No matter who we face we want to get five points. But the ‘how’ is important.

The Cheetahs coach praised the side for their defence‚ one of the aspects that was lacking in last year’s PRO14.

“We are happy with our defence. We have been defending well‚ but we still have had soft moments‚ even in the Currie Cup‚” Smith said.

“From January our emphasis has moved a little more towards defence. Our strategy and how we want to defend is coming together.

“The confidence these players needed‚ we gained in the Currie Cup. Winning without the ball is one of the components teams need.

Rugby World Cup snippets: All the drama‚ skill and tension

The first weekend of Rugby World Cup has already delivered drama‚ skill and tension. Here are a few of the storylines from the past 48 hours.
Sport
1 year ago

"You can win with the ball by scoring tries but you also need to win without the ball. That is slowly growing and is becoming part of our DNA.”

In Port Elizabeth the Kings held a 13-5 halftime lead and led 20-12 in the 67th minute before the Cardiff Blues pack mauled their way to two tries to take the lead.

The Kings scored a late try through Andell Loubscher‚ but it left them just short and handed the Welsh side a good victory away from home.

Interim coach Robbi Kempson felt finishing let them down‚ but was happy with the team’s performance.

“There was a lot of promising play from the guys‚ but there were too many missed opportunities‚” Kempson said.

“We had three opportunities in their strike zone that we didn’t come away with points and when you are playing teams in the PRO14‚ that is the difference in the game.

“That is probably why we ended up a bit short in the end. But a lot of youngsters got a run today and it is good to see our kicking game is in tact.

"There are a few subtleties that we need to work on but we will get there.

“It was our first hit out against very experienced opposition – they had more than 1000 caps on the field while we didn’t have that many.

"I’m disappointed with the result‚ but not the manner in which we went about our business.”