Rugby World Cup snippets: All the drama‚ skill and tension 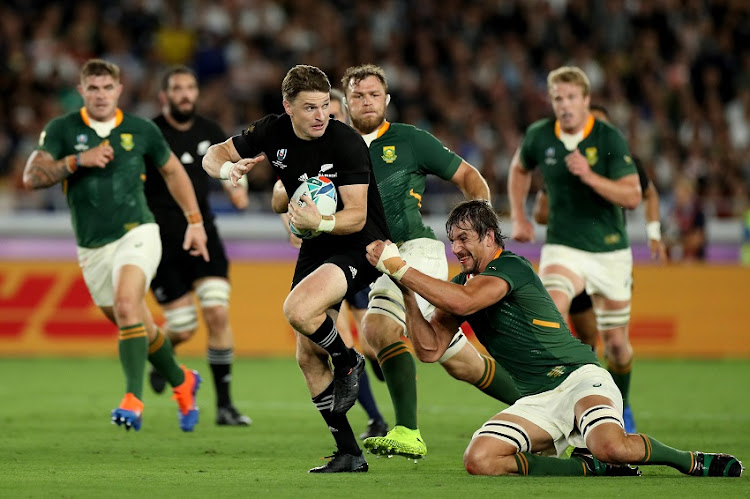 Beauden Barrett of the All Blacks makes a break during the Rugby World Cup 2019 Group B game between New Zealand and South Africa at International Stadium Yokohama on September 21, 2019 in Yokohama, Kanagawa, Japan.
Image: Hannah Peters/Getty Images

The first weekend of Rugby World Cup has already delivered drama‚ skill and tension. Here are a few of the storylines from the past 48 hours.

Fofana out of RWC 2019 – France’s drama-filled 23-21 win over Argentina in their opening Pool C encounter was offset with the news that centre Wesley Fofana is out of the tournament.

The 31-year-old didn’t play in the match because of a thigh injury and after desperate attempts to be fit‚ the injury wasn’t responding as hoped.

Pierre–Louis Barassi will replace the 48 Test veteran‚ who was set to retire from Test rugby after the tournament.

Nyakane in tears after hobbling off against ABs – Bok tighthead Trevor Nyakane’s RWC may be over if his body language was anything to go by after he hobbled off against the All Blacks.

Nyakane suffered a calf muscle injury against Japan two weeks ago and despite being cleared to play against NZ in Yokohama‚ only lasted 19 minutes before being assisted from the field.

He was in tears on the sideline and coach Rassie Erasmus admitted the injury “looked fairly serious.”

Cheika moans about officials (shock‚ horror)– It just wouldn’t be a Test involving Australia if coach Michael Cheika didn’t have something to whinge about despite his side’s 39-21 win over Fiji in Sapporo.

"I heard his (Pocock’s) name mentioned between them on the commentary at last half-a-dozen times in their own chat‚ when he hadn't even been involved in a ruck.

Weather still an issue – Heat and humidity have been issues for teams in the week leading up to the start of RWC 2019 in Japan‚ but on the weekend the threat of a typhoon also created problems.

Two fan parks in Kumamoto and Fukuoka had to be closed on Saturday as typhoon Tapah approached the west of the country and headed for the northern island of Hokkaido.

"The typhoon could bring high winds and heavy rain to the southern island of Kyushu on the evening of 22 September and into 23 September‚" World Rugby said in a statement.

"While no match disruption is anticipated at this stage‚ we have advised teams of potential disruption to training and team movements as a precautionary measure.”

Surprising support for the Boks – In the days leading up to the clash against New Zealand‚ two of the world’s most prominent sportsmen came out in support of the Springboks.

Tennis star Novak Djokovic posted a video of himself offering his support to the Boks and that was followed by NFL legend Tom Brady doing to same.

Brady’s final punt of ‘Go Bokke’ sounded more like he was saying the name of prop Lizo ‘Gqoboka’‚ but it was appreciated.

US trash talk – USA hooker James Hilterbrand is nothing if not confident before his side’s RWC opener against England.

The fiery front ranker said: "Those guys don't deserve to be on the field with us. That's the way that we have to think about it.

"We're not some subservient rugby nation that doesn't deserve to be on the pitch and can't win.”

Hilterbrand wasn’t done‚ warning those listening that the USA were now a properly professional unit.

“To go from what was a high school rugby paddock to the Olympic training centre in Colorado Springs is indicative of the level of professionalism that’s come to the game‚" he said.

"USA Rugby is no longer a sleeping giant‚ it’s woken up and it’s happening – I think it’s just going through breakfast at the moment.”

Matsushima becomes first player of African descent to score at RWC 2019 – Japan wing Kotaro Matsushima joined fellow African Lappies Labuschagne as try-scorers for Japan in the opening match of the tournament against Russia.

Matsushima has a Zimbabwean mother and Japanese father and was enrolled at the Sharks Academy for a short stint.

Labuschagne‚ of course‚ hails from Bloemfontein and played for the Cheetahs for four seasons before moving to Japan.

Matsushima scored a hat-trick against the Russians.