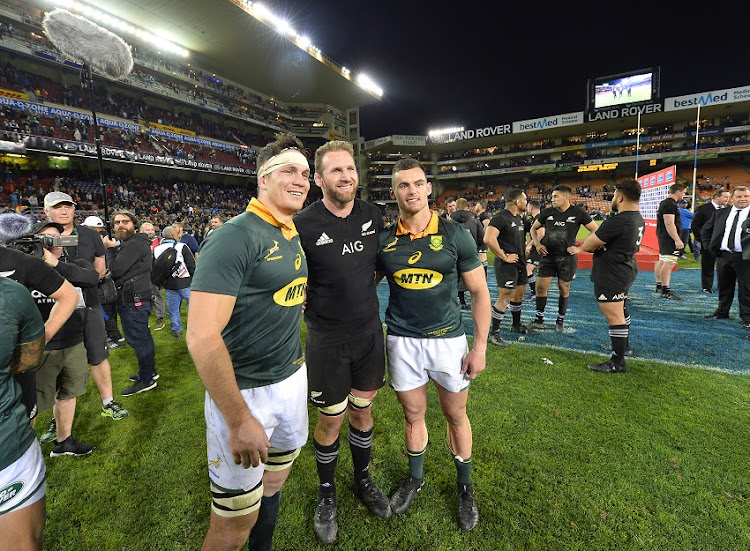 The ruthless efficiency that has increasingly become a feature of the Springboks’ play has meant that they have not had to deviate from the script that has worked for them.

They might now be typecast as predictable‚ which brought All Blacks captain Kieran Read to a point that may prove prescient when the teams play in a Rugby World Cup (RWC) pool match in Yokohama on Saturday.

“I expect the same‚” said Read when asked what the Boks might bring differently from the challenge they presented the All Blacks in their 16-all draw in Wellington earlier this year.

“They’ve had success. There is nothing special about the way they play. They do what they do well.

“They are physical‚ they’re kicking well‚ and they take the points when they’re on offer using their strengths like their maul.

“They also have the ability to play off counter-attack and turn over ball from their backs. We know what is coming our way and that’s great.

"We are in a good place to put a plan out that we think is going to match it.”

Matching the Boks means the All Blacks will also have to be up for the challenge in the physical exchanges.

Read has Ardie Savea and Sam Cane either side of him‚ with the All Blacks captain suddenly towering above his fellow loose forwards.

“This is probably the first time I’m the biggest loose forward out there‚” Read said with a wry smile.

“Across the board we have to be physical against the South African team. I pride myself on my defence.

“This is probably the first time I’m the biggest loose forward out there.”

Savea‚ who will operate more as a ball carrying loose forward‚ shrugged his shoulders when asked about his relatively new role in the team.

“I’m just grateful to be out there. For me it is not about having the number six on my back. That role comes with my prep during the week. I’m just enjoying it.”

His presence in concert with Cane means the All Blacks will have two proficient ball stealers in their back row.

“Whether it is seven‚ eight or six‚ it doesn’t really matter to me. I just go out there and do what’s expected of me‚” said Savea when pressed on the specifics of his role.

Read‚ who has a long established rivalry with Duane Verneulen‚ was surprised to learn his adversary will be playing in his 50th on Saturday.

“I think I probably played about 50 against him myself. I’m surprised‚ I thought he played a lot more. He is a top bloke and a very aggressive man and just loves to carry and tackle hard and I enjoy that challenge‚ so good luck to him‚” said Read.