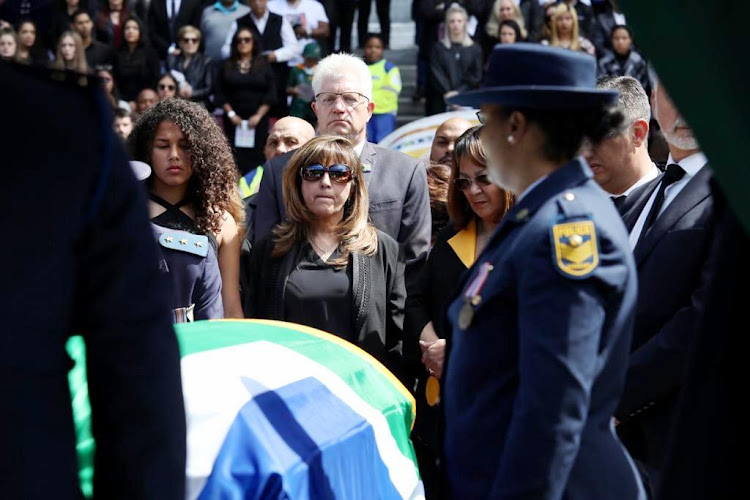 Chester Williams' widow, Maria, with his coffin at the rugby star's funeral at Newlands, in Cape Town, on September 14 2019. She is flanked by her daughter, Chloe, 15, and public works minister Patricia de Lille. At the back is Western Cape Premier Alan Winde.
Image: Esa Alexander

A crowd gathered at the Newlands stadium on Saturday, not to watch a game of rugby but to bid farewell to one of the most iconic sportsmen SA has seen.

Opening the funeral of Chester Williams — the hero of the 1995 squad that took SA to victory at the World Cup — MC John Lloyd said the team had reunited.

“This is the last time they will be together,” he said, standing near a coffin draped in the SA flag. 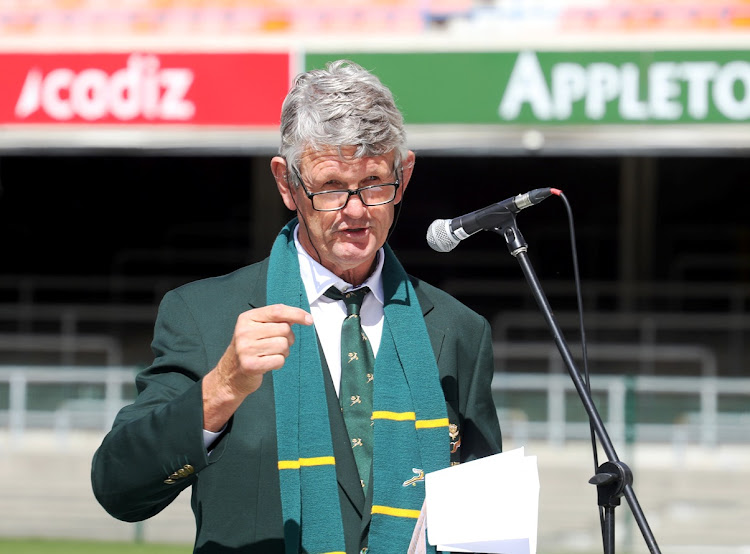 Springbok legend Morne du Plessis said every member of the 1995 Springbok squad was exceptional, “but even among them, Chesi was distinctive”.

He spoke of Williams’ work ethic, and added “he was small of stature but had the brave heart of a lion” and that this was “even more apparent off the field than it was on the field”.

Some had made Williams a “poster boy” for transformation, but this had put enormous “responsibility and expectation” on the man.

Williams responded by letting his brilliance on the field stand as “an inspiration for millions of South Africans then and now”.

Du Plessis recalled walking through “the long, unforgiving tunnel” at Ellis Park on the day of the country’s World Cup win, and seeing Williams placing both his hands over that of Nelson Mandela, who was greeting everyone in the squad.

“That day did not solve our problems, but it changed many attitudes,” he said. 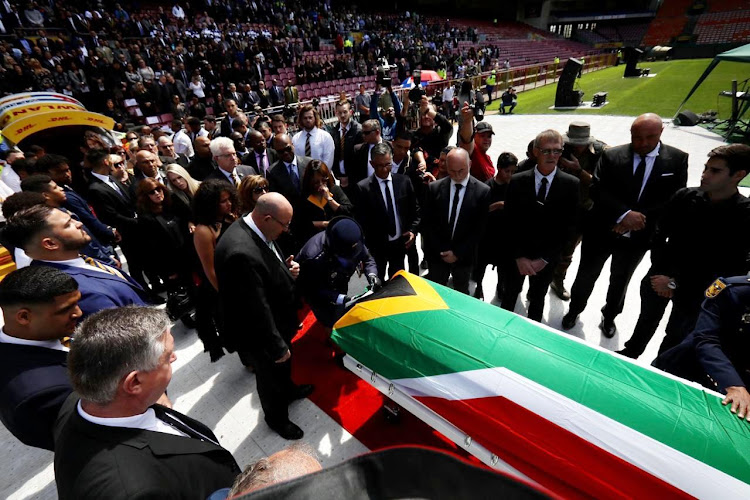 Williams was also honoured by Dan Dinu, with whom he worked closely in Romania as a coach.

“Chesi’s death is a great reminder to us all how fragile our existence is no matter how big our greatness,” said Dinu.

Williams had “conquered not just the rugby field but our hearts too” and “everything he touched turned to a gold medal on the field”. Beyond that, he was someone who “always opened his heart to others”.

Mandla Gagayi, director of sport at the University of Western Cape where Williams took the first XV into the Varsity Cup this year, said he would be remembered for his “loyalty, compassion, and love for our country”. 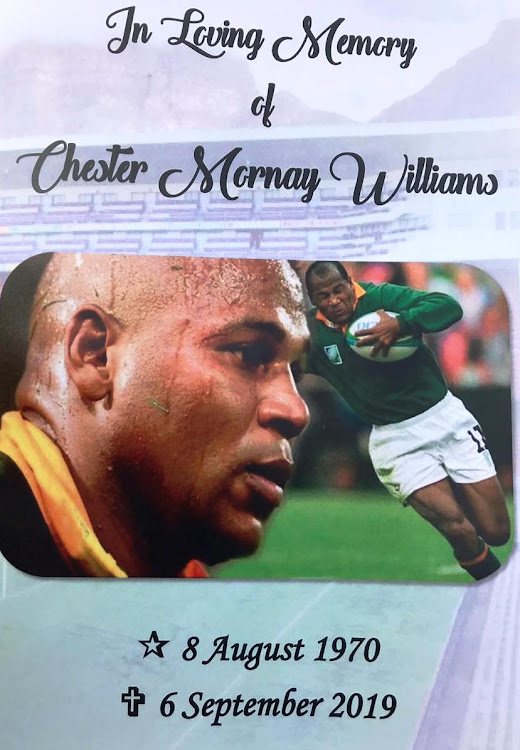 The order of service for the funeral of Chester Williams at Newlands rugby stadium in Cape Town on September 14 2019.
Image: Tanya Farber

Pete Gottgens, Williams’ business partner in a craft beer venture, said the rugby star was able to forge close friendships with “no strings attached” and that the two men had had many “soul-searching conversations”.

Williams had lived the message of a poem by the 19th century Quaker missionary Stephen Grellet: “I expect to pass through this world but once; Any good thing that I can do, or any kindness I can show, to any fellow human being, let me do it now.”

Steve Harris, another close friends of Williams, described how the former winger had done everything in his power to be appointed as coach of the Springboks, but this had not come to pass.

But, added Harris, “he coached by example and will always remain an example to all South Africans”.

Next on the programme were Williams’ family members including his wife, Maria, and children Ryan, Matthew and Chloe.

While Maria paid tribute to the love her husband had shown for her and the children, she also highlighted the work they had done through the Chester Williams Foundation.

She pledged to her late husband and their children that she would carry on holding the flame for the foundation and their family. Turning to their three children, she said: “I promise you, we are going to make it as a very happy family, just as daddy would want it to be.”

She was followed by the three children, all of whom spoke about their father’s warmth and kindness. 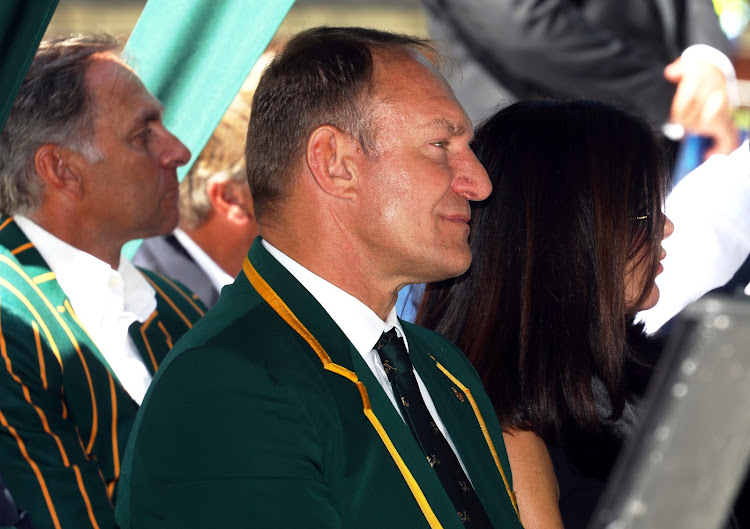 Ryan, the eldest, said: “We will carry on living our lives the way you taught us,” while Chloe, 15, said “he had a smile that could brighten up the whole room”.

Public works minister Patricia de Lille, a long-standing friend of Williams, read messages of support that had come in from all over the world, including one from the All Blacks team that Williams helped defeat in the 1995 final.

Minister of sports, arts and culture Nathi Mthethwa said Williams had achieved great success despite the context of apartheid, which was “deliberately designed to send him into obscurity”. Just as the heavy sorrow of the funeral seemed too much to bear, PJ Powers — celebrated singer and personal friend of Williams — lifted the mood by singing Jabulani but asking those present to sing along and substitute the name Chester Williams for Jabulani.

That got everyone dancing, clapping and singing in a moment of relief. 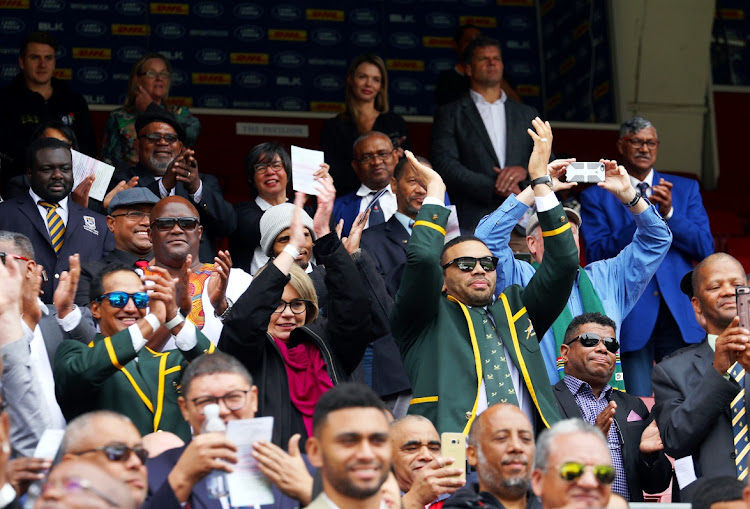 Lloyd then followed suit and said that instead of a minute of silence, he wanted a minute of applause and asked everyone to picture Williams on the field about to pull a brilliant move.

For a whole minute, the stadium reverberated with shouts and applause as everyone cheered Williams on to score a try for his team.

The mood then had to return to a more sombre one as the police procession came in as its band played Abide with Me.