Springboks have acclimatisation head start on All Blacks 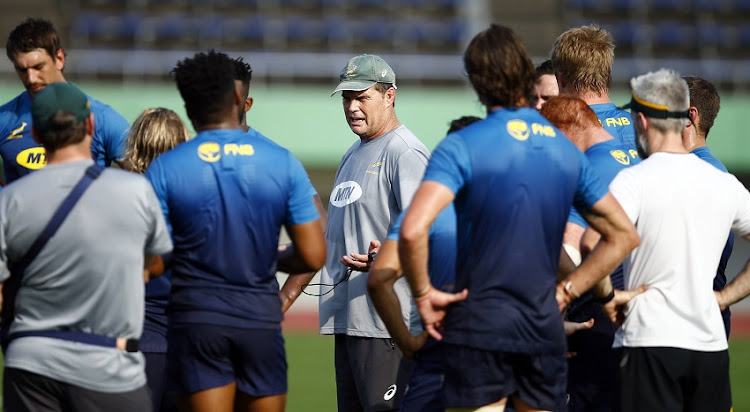 The Springboks will have a good head start on the All Blacks in terms of acclimatising to the conditions in Japan with 11 days to go before their Rugby World Cup 2019 clash in Yokohama.

Bok coach Rassie Erasmus has deliberately taken his squad into the hotter‚ muggier south of the country to prepare in the city of Kagoshima.

It’s not a RWC venue but a training base.

It is one of the only major cities not connected to Tokyo by rail and required a two hour flight from the main city to access. But it has all the essentials the Boks need.

On Monday Erasmus put the squad through a 90-minute training session in sweltering heat in front of thousands of locals who turned out to watch.

Considering two points or fewer have decided the last four matches between the Boks and All Blacks‚ every small advantage could be vital.

Having beaten Japan 41-7 in Kumagaya last Friday‚ in what were hot and humid conditions‚ the Boks probably gained more than the All Blacks did by thrashing Tonga 92-7 in Hamilton.

In the extreme conditions the Boks were forced to slow the game and to employ a gameplan based heavily on tactical kicking and field position.

It wasn’t always pretty but it was effective as the Boks scored six tries.

The All Blacks had not arrived in Japan by Monday while the Boks have been there for two weeks already.

“The outcome of the All Black match will be a very difficult to predict because the conditions it will be played in are very different to both South Africa and New Zealand‚” Erasmus told the local media at a Mayoral welcome in Kagoshima.

“It’s generally very dry in SA and it rains a lot in New Zealand.

"But here it’s humid and hot and the ball is slipper‚ so whichever team adapts quickest to the conditions will have an advantage.”

Erasmus is known as a meticulous planner and nothing has been done by accident or on a whim.

Kagoshima is a harsher environment‚ being some 1400km south of Tokyo‚ than most places in Japan.

“After the decision was made to play Japan before the World Cup myself and Charles Wessels (operations manager) decided to visit several potential sites and see which met our needs‚” Erasmus said.

“Kagoshima was the best.

"We were very happy with the city‚ the hotel and of course the facilities‚ which we believe will give us a good chance in the World Cup.

“The more extreme the training conditions are‚ the better it will be for the players’ bodies in match situations.

“It might make the Test matches feel easier because of the tough and extreme conditions the players have‚ and will be‚ going through in training.”

The Boks will have four sessions in the city this week before heading back north to Yokohama to make their final preparations to face the All Blacks.