Image: Wessel Oosthuizen/Gallo Images Springbok winger Chester Williams, who was a member of the team that won the 1995 Rugby World Cup, died on Friday.

Chester Williams was a hero and a role model, President Cyril Ramaphosa said on Friday night as he paid tribute to the star Springbok winger.

The World Cup-winning Williams died on Friday after a suspected heart attack. He had been admitted to the Panorama Hospital in Bellville. He was 49.

In a statement, he said Williams earned national and international acclaim with his contribution, alongside that of recently deceased wing James Small, to South Africa’s triumph in the 1995 Rugby World Cup.

“Chester Williams’s death at this tender age leaves all South Africans bereft of a rugby hero and national role model who still had a great deal to offer his sport and his country,” said Ramaphosa.

“We will miss the humility and joy of life with which Chester conducted himself during an illustrious career that inspired hundreds of thousands of South African children who had previously been excluded from rugby, to take up the game. We salute him for the extraordinary achievements he recorded in a life that has sadly ended prematurely.” 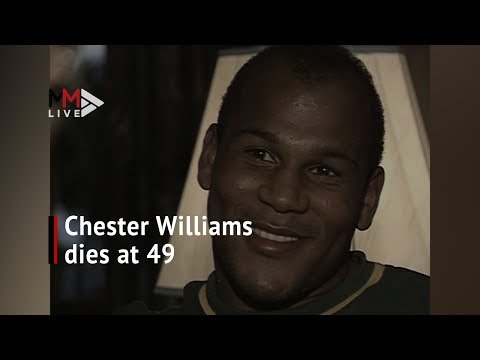 Gasant Abarder, spokesperson for the University of the Western Cape - where Williams was a title-winning rugby coach - said he had last communicated with Williams late on Friday morning. The last message in their WhatsApp exchange was sent at 11.55am.

He said he was shocked to hear at about 6.30pm that Williams had died.

“I was with him yesterday [Thursday] in a meeting, and I gave a him a lift to the university's administration block. And the guy was fine,” Abarder said.

“A journalist wanted to chat to him about the new beer label that he had just launched and we said goodbye and that was it. Then I got a call 30 minutes ago,” he said at about 7pm on Friday.

Abarder said Williams had been about to travel to Japan to attend the Rugby World Cup, which starts in less than two weeks.

“He was really looking forward to that. He was in really good spirits,” he said.

He also said Williams, who celebrated his 49th birthday on August 8, had begun a recruitment drive for players for the university.

“Chester was like a dad to these rugby players,” he said.

University rector and vice-chancellor Prof Tyrone Pretorius described Williams as “a man who belonged to the South African nation”.

“It is with great sadness and shock that we have learnt that Chester Williams, our head of rugby and legendary Springbok, has died. While Chester was a passionate supporter and leader of rugby at the UWC, he was a man who belonged to the South African nation.

"[He was] beloved on campus by players, colleagues and students alike for his gentle yet determined manner. We have indeed lost a giant today. We will forever be indebted to this son of the South African soil for his talented display on the field as well as his innately compassionate character off the field,” said Pretorius.

“Chester transcended barriers of all kinds and will always stand as a beacon of transformation, determination and talent.

“Our thoughts and prayers are with his family during this difficult time and we, along with the South African nation and rugby fraternity, pay tribute to a humble, generous and beloved legend,” he added.