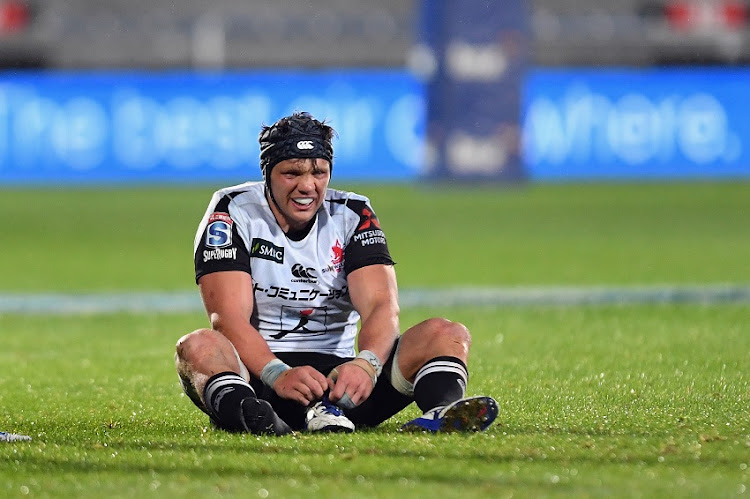 Pieter Lappies Labuschagne of the Sunwolves reacts during the round 10 Super Rugby match between the Crusaders and the Sunwolves at AMI Stadium on April 21, 2018 in Christchurch, New Zealand.
Image: Kai Schwoerer/Getty Images

The Springboks will encounter a familiar face when they meet Japan in Kumagaya on Friday after flank Lappies Labuschagne was named in the Brave Blossoms’ starting line-up.

Labuschagne made his name for the Cheetahs between 2011-2014 and was close to Springbok selection in 2013‚ before moving to Japan and qualifying through residency for his adopted country.

Now 30‚ Labuschagne made his Test debut in July against Fiji and captained Japan that day too.

On Friday veteran flank Michael Leitch will again lead Japan against the Boks. Leitch famously captained Japan to their historic 34-32 win over the Springboks in Brighton at Rugby World Cup 2015.

Leitch‚ who has also played Super Rugby for the Chiefs‚ bravely overruled then-coach Eddie Jones’s instructions to kick for goal from a penalty directly in front of the uprights‚ which would have secured a draw.

The skipper opted for a scrum seven metres from the Boks’ line. Two phases later utility back Karne Hesketh scored perhaps the most famous try in rugby history to secure victory for Japan.

Leitch was quick to sow some doubt in South African minds 48 hours before their second-ever meeting.

“The last time we played against South Africa‚ they were just so far above us. This time they are as well‚ as they have ability to win against the All Blacks. But it has become important to observe each player‚” Leitch said.

“If you see the analysis of players one by one‚ you start to see that there is weakness in each player.

“When it becomes a match of human against human‚ we are quick‚ we have power and then we can create confidence to play against South Africa.”

While the stakes in Friday’s match aren’t as high as it’s a warm-up to RWC 2019‚ the Boks have the most to lose if they struggle against a side they should comfortably overcome.

Bok coach Rassie Erasmus has shown Japan maximum respect by picking his best combination for the match – a fact lauded by opposite number Jamie Joseph.

“It shows respect and it gives our players something to look forward to‚” Joseph said.

“I’ve faced a lot of questions this last week about if I think it’s a risky game before the World Cup‚ but unless we play the best teams we’ll never get a true measure of where we are.”

Japan won all three of their recent matches in the Pacific Nations Cup‚ beating Fiji‚ Tonga and Samoa. At home‚ in front of a partisan crowd‚ they will be formidable.

“South Africa is a must-perform game; we need to perform‚ play our type of rugby and take our challenge to them.

“It is the last game of our preparation‚ gives our players a real physical experience at the set-piece‚ at the tackle‚ in the lineout and in the maul.”

The Springboks are taking a similar view to the match‚ which is set to be contested in hot‚ humid conditions.

“There has been a lot more attention to detail‚ in our preparation‚” No 8 Duane Vermeulen said. “Breakdown-wise‚ when the ball might pop out‚ we have to be ready.

“We have to work on the small details to make sure we get that perfected and make sure everyone knows what to do‚ especially with the ball being slippery and wet.

“You know the conditions‚ but you don’t really get used to the conditions because the humidity affects every single player. It’s going to be a difficult and we need to prepare accordingly.”

Wing Cheslin Kolbe had similar sentiments and he also said that what happened in Brighton was in the past.

“With the humidity and the ball being wet‚ I think we just have to – in terms of playing style – stay close to one another and just simplify our game‚” Kolbe said.

“We do have to get used to the humidity‚ but rugby is rugby and we just have to play the best we can.

“We are a proud nation and definitely go out there to win. We shouldn’t have the mindset of what happened four years ago – we should just focus on the match on Friday.

“What happened four years ago‚ happened. We can’t rectify that‚ so we have to stay in this moment. We should not have any fear‚ just be ourselves and play our natural game.”