Bok coach Rassie Erasmus runs rule over the All Blacks 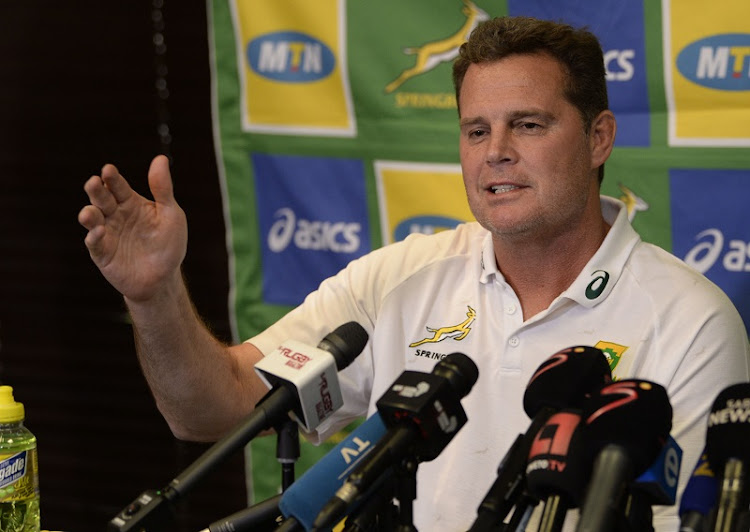 If their over-30s hold up the All Blacks will be a handful at the Rugby World Cup (RWC)‚ Springbok coach Rassie Erasmus has cautioned.

Erasmus is all too aware of the value of experience at the RWC‚ which was perhaps best illustrated by Clive Woodward’s so called ‘Dad’s Army’ who rose to the challenge in Sydney in 2003.

Although his team only had four players with more than 50 caps at the start of the 2007 RWC‚ 12 of Jake White’s squad members had played more than 30 Tests by the time they launched their successful assault on the trophy in Paris.

Erasmus was asked to run the rule over Steve Hansen’s side that was unveiled earlier this week and while he gave the thumbs up to the experience in that side‚ he also sounded a word of caution. Nine All Blacks are over 30.

He’s nervous‚ excited and comfortable his team has prepared well.
Sport
1 year ago

“It is tough to select a RWC squad when players have niggling injuries. Especially players who are over 30‚” he said.

“I experienced it previously in a RWC if you have a lot of players over 30 you really have to manage your squad well‚ especially with a short turn around time.

“If I look at their squad age there’s quite a few over 30 and you have a guy like [Brodie] Retallick in there because he is such an important player for them. I guess he is going to be fit for them somewhere in the tournament.”

Erasmus then pointed to a similar selection conundrum in his squad.

“We had issues like that with a player like Siya [Kolisi] who we had to get fit. If he didn’t play against Argentina and he didn’t get through that game I [was] worried to take him to the RWC because where do you get him fit?” said Erasmus.

In 1999 when Springbok coach Johan “Rassie” Erasmus was part of World Cup group as a player‚ Schalk Brits was a blockbusting hooker at Paul Roos ...
Sport
1 year ago

“They have a really strong squad‚ if they get Retallick match fit and those players over 30 don’t have those niggling injuries. They have an experienced squad and they’ll be the team to beat at the RWC.”

Apart from directing much of their energy towards getting a positive result against the All Blacks in their tournament opener‚ Erasmus said he was wary of their opponents Japan‚ whom they face in a warm-up match on September 6.

He identified it as a ‘tricky’ fixture. “(They are) almost ambushing us on that side. They are really well organised. This is an away Test in front of a full house against a Japanese team that beat us last time. We are a bit nervous for that first one‚ also.”

Erasmus‚ although keen to give players who are short of a gallop a run against Japan‚ also wants to use the occasion as a dress rehearsal for their match against the All Blacks two weeks later.

Of course captain Kolisi is likely to feature‚ but the coach is also keen to get the under-utilised Frans Steyn up to speed.

Springbok lock Eben Etzebeth appeared at the Human Rights Commission (HRC) to answer questions related to an incident at a Langebaan drinking ...
Sport
1 year ago

Springboks coach Rassie Erasmus yesterday named his final 31-man Rugby World Cup squad that raised some hopes of conquering the world in Japan next ...
Opinion
1 year ago
Next Article