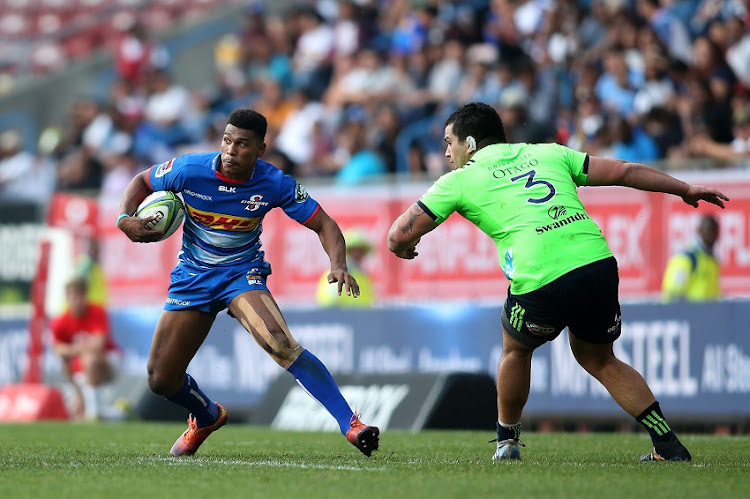 Damian Willemse of the Stormers on the attack during the 2019 Super Rugby game between the Stormers and the Highlanders at Newlands Rugby Stadium in Cape Town on 25 May 2019.
Image: ©Shaun Roy/BackpagePix

Western Province coach John Dobson will throw all his best weapons at the Free State Cheetahs in Bloemfontein this weekend after naming Damian Willemse at flyhalf for the vital clash.

WP need to win with a bonus point while also denying the Cheetahs a losing bonus point‚ to guarantee their semi-final place. Anything less will mean they have to rely on other results going their way.

Willemse‚ who only returned from a lengthy knee injury lay-off last week‚ will hopefully bring the creative spark the team needs in the vital pivot position.

Dobson also surprised by naming Junior Springbok centre Rikus Pretorius in the starting lineup for his Currie Cup debut while there were also places for returning Boks Dillyn Leyds at fullback‚ Scarra Ntubeni at hooker and tighthead Wilco Louw.

“We are going to have to attack more in this match because the reality is that you’re not going to beat the Cheetahs without scoring lots of tries‚” Dobson said.

“Damian Willemse simply had to start. He is a very attacking flyhalf and although he has to fit into our game plan and structure‚ I expect us to be more fluid on attack with Damian there.”

Dobson also had expectations of Pretorius‚ who was one of the best players at the recent U20 World Championships in Argentina.

“Rikus was an outstanding for the Junior Boks at the U20 World Championships‚” Dobson said.

“We have probably left this move a little late‚ especially if this is to be our last game in the tournament‚ but we need to build for the future.

“Rikus is big and physical and takes the ball to the gainline. We are excited by what he can bring.

“Dan Kriel is also struggling with an ankle injury and was unable to train this week. But we also have an eye on the future and for next year’s Super Rugby‚ our centre stocks aren’t what they were with Damian de Allende moving on.

“At some stage we have to be brave because Rikus might be involved in Super Rugby next year. And he deserves the chance. We have used the same centres throughout the Currie Cup and we haven’t created enough chances for the likes of Rikus.”

With Leyds’ return SP Marais moves to wing with Seabelo Senatla dropping to the bench.

“Neither Sergeal Petersen or Seabelo Senatla are cleared for 80 minutes of rugby because of tendonitis and therefore they will effectively share this game‚” Dobson said.

“On that type of field they can produce some magic and we are managing Seabelo’s workload so he can be available for a semi-final if we get there.”

The only changes to the forward pack come in the front row‚ where Louw and Ntubeni take their places alongside Corne Fourie.

Looseforward Juarno Augustus also in the match 23 on his return from injury.