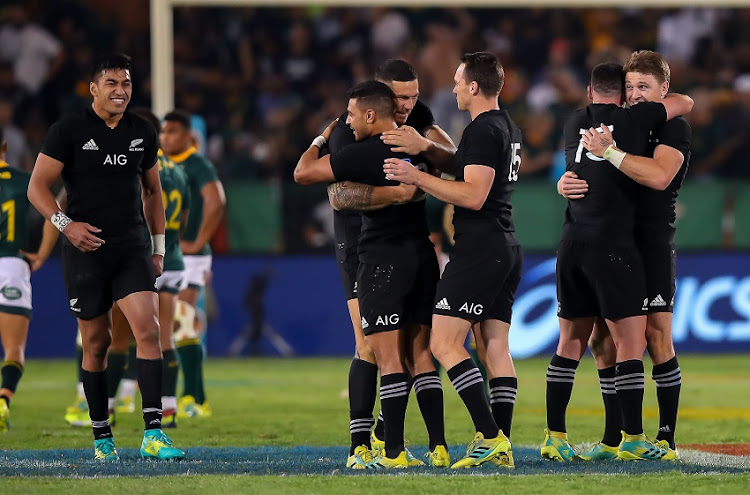 The Invested All Blacks celebrate after the final whistle during the Rugby Championship match between South Africa and New Zealand at Loftus Versfeld on October 06, 2018 in Pretoria, South Africa.
Image: Gordon Arons/Gallo Images

Australia have their best chance of getting their hands on the Bledisloe Cup since 2002 on Saturday when they meet an All Blacks side facing the prospect of the wheels falling off their bid for a third successive World Cup.

The Wallabies revived their own World Cup prospects by producing arguably their best and most consistent 80 minutes of rugby in more than a decade in their record 47-26 win over the world champions in Perth last week.

A fierce backlash is widely expected at Eden Park but if it fails to materialise and New Zealand go three matches without a win for the first time since 1998, All Blacks coach Steve Hansen will have some big questions to answer.

Wallabies coach Michael Cheika has been under all kinds of pressure for the last four years and knows very well that the All Blacks typically follow a defeat to Australia by handing out a mauling in the following game.

Recent history is firmly against the visitors with Australia not having beaten the All Blacks in New Zealand since 2001 — a run of 22 losses — and winless in Bledisloe tests at Eden Park for the last 33 years.

Cheika, however, also recognised how close his side were to overturning a long period of frustration on Saturday.

“The Bledisloe Cup means a lot,” Cheika told reporters in Melbourne after he made one injury-enforced change to the side that won in Perth with Adam Coleman moving from the bench to the second row to replace Rory Arnold.

“It means a lot when you have it, but it probably means more when you don’t have it.

That pursuit of trying to get it, sometimes you take a step off and say we’ll take the game in our stride.

“But that’s only hiding from the fact that we haven’t had it for a while and we are going to do our best to play well and get hold of the trophy, obviously.”

A loss on Saturday to their closest neighbours and giving up the Bledisloe Cup after 16 years would be the cause of major concern for rugby-mad New Zealand, whose fans have become accustomed to success after success from the All Blacks.

With the Perth drubbing, albeit after playing half the game with 14 men, coming after a home draw against South Africa, some are already questioning whether the All Blacks are losing their aura at just the wrong time with World Cup so close.

Hansen responded to the concerns by swinging the axe and dropping three formerly first-choice players in prop Owen Franks and outside backs Ben Smith and Rieko Ioane.

Australian media suggested Hansen was panicking just five weeks out from the global showpiece and while he confirmed the trio had been dropped, the coach added he had also needed to run an eye over his less-experienced players before the World Cup.

“But we’ve made decisions because we’ve got to find out more about people ... in these big pressure cooker situations, and you don’t get much bigger than this one.

“We have to find out more about other people and to win this World Cup we have had to roll the dice a bit.

“We wouldn’t be doing it if we didn’t think that the guys we’re putting in are good enough to do the job on Saturday ... I don’t think it’s a risk and there’s lots of rewards in it.”