Siya Kolisi returns but will not captain the Springboks against Argentina 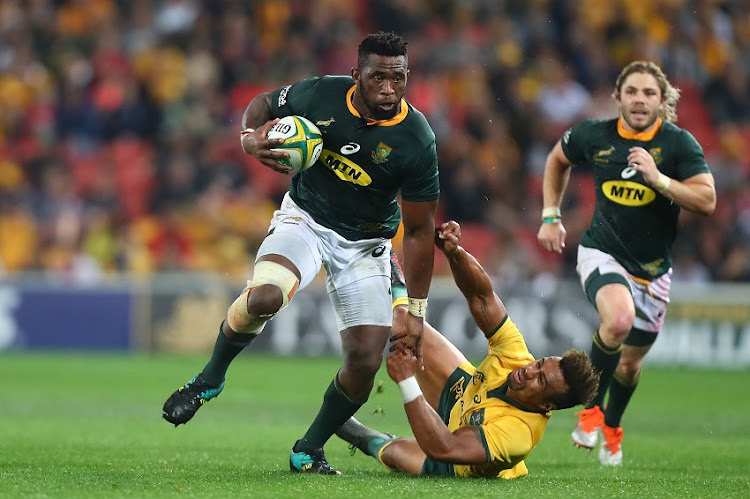 Siya Kolisi of the Springboks breaks through a tackle by Will Genia of the Wallabies during The Rugby Championship match between the Australian Wallabies and the South Africa Springboks at Suncorp Stadium on September 8, 2018 in Brisbane, Australia.
Image: Chris Hyde/Getty Images

Siya Kolisi will make his long-awaited return to the Springboks starting line-up when they face Argentina at Loftus on Saturday but he will not captain the side in the World Cup farewell Test.

Schalk Brits will captain the Boks against the South Americans.

Coach Rassie Erasmus explained that he opted for Brits to lead the team ahead of the returning Kolisi as he is slowly being reintegrated back into the team after a long injury lay-off.

“I’ve asked Siya to empty his tank and go hard for as long as he can and he might even come off in the first half‚" Erasmus.

"He has played less than 50 minutes of Currie Cup rugby in the last 12 weeks but I needed him to have a taste of Test rugby again before we leave for Japan.”

Lions pivot Elton Jantjies will be the vice-captain on Saturday.

Erasmus‚ who confirmed that Kolisi remains the captain of the side‚ named a new-look team made up mostly of players who are still looking to secure places in the World Cup-bound squad.

“Siya remains the captain of the team‚" the Bok coach said.

"It is a matter of him getting medically fit.

"We are clear how we are going to handle the captaincy‚ we want him back to his best form and to regain his confidence.”

Erasmus has given the nod to 18 players who featured in the Rugby Championship-winning campaign but he also included five “newcomers” in the returning Kolisi‚ Thomas du Toit and Wilco Louw‚ Marco van Staden and potential debutant Scarra Ntubeni.

The backline that helped overwhelm Australia at Ellis Park a month ago has been re-united with the exception of the scrumhalf where Cobus Reinach will start.

The pack features a new front row with the mighty Bulls locking combination and a first start of the season for Marcell Coetzee alongside Kolisi and Rynhardt Elstadt.

Elton Jantjies will take over the leadership role in the event of Brits being replaced and open the way for Ntubeni to make his debut.

Erasmus said the split between six forwards and two backs on the bench was to provide extra looseforward cover for Kolisi’s cameo return.

Frans Steyn would cover all of flyhalf‚ centre and fullback with Faf de Klerk the only other back replacement.

Herschel Jantjies was slated to provide scrumhalf cover but was withdrawn on Tuesday following a blow to his head in training.

But the knock is not expected to affect his potential inclusion in the World Cup squad.

“This is a massive Test for us against a fired-up Argentina team that will be looking to end their Test campaign on a high. We’ve gained momentum over the Castle Lager Rugby Championship – the last thing we want to do is lose it‚” said Erasmus.