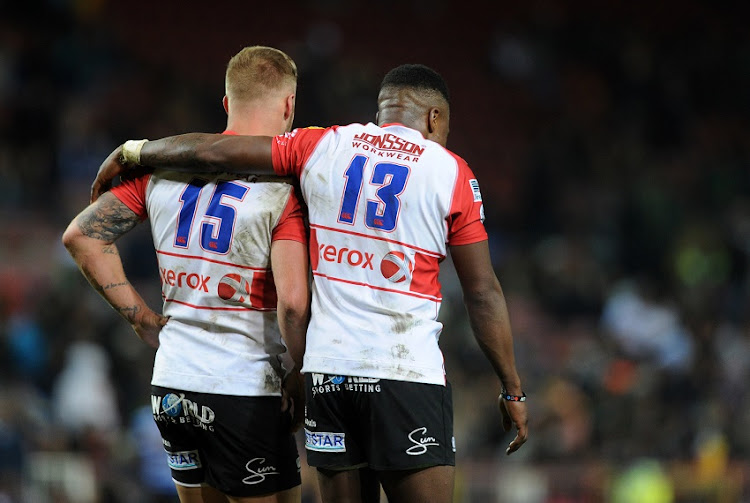 Simelani Wandisile of the Lions celebrates with try scoring teammate Tyrone Green of the Lions during the 2019 Currie Cup game between Western Province and the Golden Lions at Newlands Rugby Stadium in Cape Town on 27 July 2019.
Image: ©Ryan Wilkisky/BackpagePix

Energised by their win at Newlands over Western Province‚ the Golden Lions limited the changes to their line-up for Friday’s Currie Cup clash against Free State Cheetahs in Bloemfontein.

They have opted for two changes to the side with Wilhelm van der Sluys coming in for the Bok bound lock Marvin Orie‚ while Jan Henning Campher is the new replacement hooker.

Orie has been called up to the Boks squad busy preparing in Auckland ahead of their Test against Argentina in Salta‚ Saturday week.

Orie was instrumental in their come-from-behind win over Western Province at Newlands and his physicality will be missed against Free State.

“We are glad for Marvin who is back with the Springboks. That is a change we had to make. It helps with the growth‚” said coach Ivan van Rooyen.

The Golden Lions will also continue to be without the physicality of flank Cyle Brink who has a broken hand‚ while wing Courtnall Skosan has a knee injury.

“We are in a race with time‚ so hopefully anything between four to six weeks they might be back. Depending on how we go in the season they might get a nod‚” said Van Rooyen.

Regular captain Warren Whiteley is also on the mend but Van Rooyen would not commit to the No8’s intended comeback match next week against the Blue Bulls at Ellis Park.

“Depending on his progress he might join us and go with to Bloem just to be part of the experience. At this stage it is just a day-to-day‚ week-to-week thing.

"I can’t commit to say he’ll play or won’t play. We’ll see by Friday and then by Monday‚” said Van Rooyen.

“We took a lot of lessons out of that game‚” said the coach.

“If you win or lose it is important to learn the same lessons. We had very good video reviews today. We spent a lot of time on it‚” said Van Rooyen‚ which perhaps also explains why he was more than half an hour late for his media obligations.

“Confidence is an interesting thing. It is something that you feel. It is something young guys live on and grow by. We are glad and our feet are on the ground. We’ll see if we can do better.”

No one embodied that more than fullback Tyrone Green at Newlands. He ran with poise and purpose and scored a marvellous individualistically crafted try.

“Tyrone has been here for a while. He was schooled here and he played Craven Week here. He also played Golden Lions under-21. He is a typical Lions’ guy.

"He works hard. He’s quiet and has a good work ethic. He’s exciting. He’s a bloke who will try things in practice.

"He’s got confidence to back himself and that is good for the team.