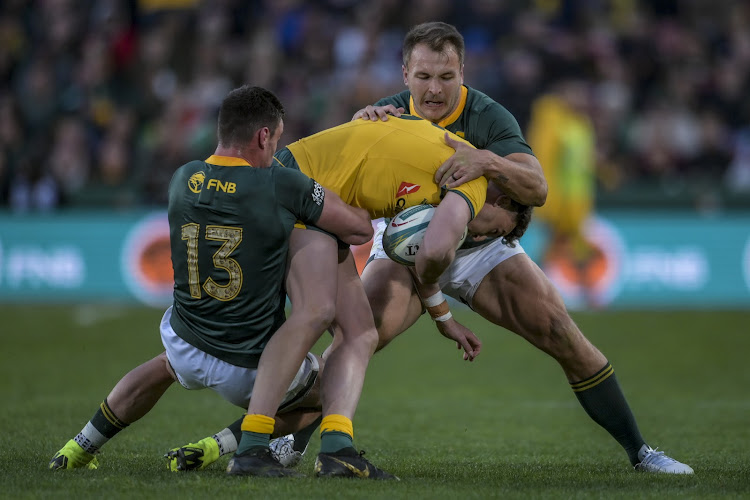 Springbok coach Rassie Erasmus is set to mix up his squad for the team’s third and final 2019 Rugby Championship match against Argentina in Salta in two weeks’ time.

Bruising centre Andre Esterhuizen and lock Marvin Orie arrived in New Zealand on Monday where the Boks are staying in camp before travelling to Buenos Aires this weekend.

The pair is likely to be included in the match day squad against the Pumas as Erasmus continues to tinker with only seven weeks to go to their 2019 World Cup opener against New Zealand in Yokohama.

Esterhuizen and Orie both featured in round one against the Wallabies at Ellis Park‚ which the Boks won 35-17 while Orie also played in the Currie Cup for the Golden Lions at the weekend.

He will go through gradual return-to-play protocols over the coming week and barring a major setback will be in the selection mix.

Herschel Jantjies‚ who scored a last minute try against NZ to help SA to the draw‚ has had a wonderful entry to Test rugby. Three tries in two matches on top of some intelligent play and crisp service have nailed down his Word Cup place.

But he might have to kick his heels on the stands during the Pumas clash with Cobus Reinach set for some more game time.

At this stage Erasmus is trying to build capacity throughout his playing group. Although winning the truncated Rugby Championships is in the Boks’ hands‚ experimentation with a view to the World Cup is the main priority.

Everything about the season has been planned meticulously and Erasmus would’ve known the make up of his squads for the three matches weeks ago. Only injuries will alter those plans.

From splitting the squad for the opening two rounds of the Championship‚ to basing themselves in Auckland instead of adding to the travel load by flying back to SA before going on to Argentina‚ the Boks finally feel like a team with direction.

The Springboks enjoyed a rest day on Monday following their transfer to Auckland on Sunday‚ and they will have a team building exercise on Tuesday with field-training sessions set to resume on Wednesday.

Erasmus said on Monday that their travel plans would continue to play a key role in preparations over the last two weeks of the campaign.

“Although we did not manage to beat New Zealand‚ I think we could see the benefit of sending a group of players out to Wellington earlier than the rest of the squad‚” said Erasmus.

“We have a good plan in place for the next two weeks‚ which includes our transfer to Buenos Aires and the match-build for the Pumas Test.”

The squad will fly out to Argentina in two batches over the coming weekend and they will be based in Buenos Aires for their Test build-up before flying out to Salta next Thursday.