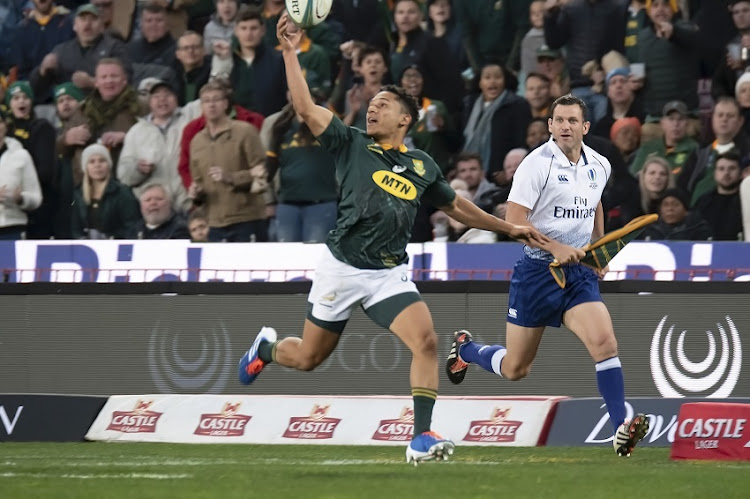 Herschel Jantjies of the Springboks during the The Rugby Championship match between South Africa and Australia at Emirates Airline Park on July 20, 2019 in Johannesburg, South Africa.
Image: Wessel Oosthuizen/Gallo Images

Even when he’s not playing for Western Province‚ new Bok sensation Herschel Jantjies has been able to lift their mood.

Only hours earlier WP had lost 32-27 to the Sharks in a heavyweight Currie Cup clash in Durban‚ which left the squad in a funk.

But then Jantjies put the smiles back on WP faces.

"We got back from the hotel in a sulky mood but decided we were going to watch the game as a team‚" captain Chris van Zyl said on Thursday.

"Although we weren't in our best mental space because of the poor performance against the Sharks‚ the joy in that room when he (Jantjies) was singing the anthem and then when he scored his first and second try was just phenomenal.

"The guys were going mental. It was special‚ even under the circumstances‚ to see how much the guys care for each other and what it means to us. He is a great man."

Coach John Dobson also praised Jantjies but refused to take any credit for Jantjies’ rise after a breakthrough Super Rugby campaign with the Stormers.

Jantjies only earned a chance when Jano Vermaak was injured in round one. The former Paul Roos student never looked back.

"I could say it (Jantjies’ elevation) was part of the plan‚ but it's been quite surprising‚" Dobson said.

"I remember one year we took him to Potchefstroom in the SuperSport Challenge and I was really scared to put him on. To be fair‚ he was 19 or 18 years old. He did quite well.

"Then last year‚ when Jano Vermaak was injured and we played Herschel in the Currie Cup final and it wasn't his best game. I thought a Currie Cup final was pushing him a little bit far and fast‚ to be honest.

"That Currie Cup final was a tough game for us and nobody played particularly well‚ but nine months later here he is.

"Coaches can't really claim credit for that. If Jano had been fit he probably wouldn't have gotten the opportunity.”

Dobson predicted that Jantjies would play a huge role for the Stormers next year‚ although his attention was firmly on this week as WP look to bounce back against the Lions at Newlands.

"Herschel is going to be a talisman of this team next year‚" Dobson said.

"He's always been a promising player‚ but I didn't expect him to be man-of-the-match in a Rugby Championship game this year. It's fantastic.

"To be fair to [Bok coach] Rassie Erasmus‚ he told us months ago that Herschel was likely to go to the World Cup."

Fullback Dillyn Leyds is a welcome returnee to the WP starting lineup for Saturday’s Currie Cup clash against the Lions at Newlands.

Leyds‚ who was an unused substitute for the Boks against Australia at Ellis Park last weekend‚ will add flair and experience to a team that shows five changes from last week’s losing unit against the Sharks.

Up front tighthead Carlu Sadie‚ who played for the Lions in Super Rugby‚ starts in place of Wilco Louw. No 8 Sikhumbuzo Notshe makes his first start of the campaign with Jaco Coetzee dropping to the bench.