Why Proudfoot says Saturday's All Blacks vs Boks showdown is important 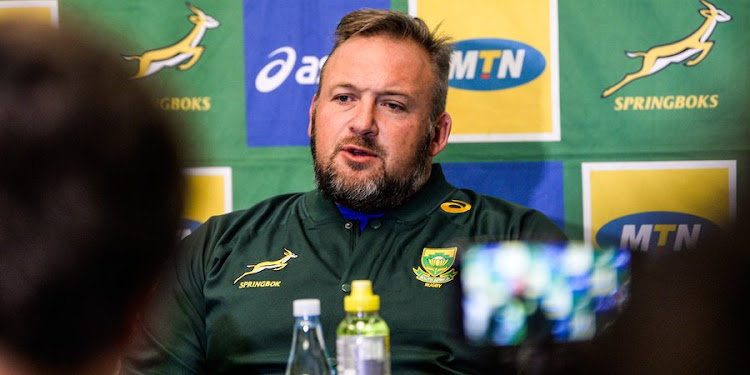 SA and New Zealand may have their eyes on the bigger carrot of the Rugby World Cup opening game to worry about in September but for Springbok assistant coach Matt Proudfoot‚ Saturday's Rugby Championship clash between the two sides in Wellington assumes equal importance.

The Boks sent over a number of players last week in preparation for the game while another group of experienced and new personnel stayed behind to beat Australia 35-17 at Emirates Airline Park in Johannesburg last Saturday.

The All Blacks have always been a difficult and different kettle of fish‚ especially at home.

However‚ Proudfoot respects the occasion of an All Black Test‚ regardless of what's at stake.

“Every time you play the world's best team‚ that's the nature of the contest.

"You need to respect the fact that the Crusaders have won three consecutive Super Rugby titles and they're the basis of the All Black team.

"The New Zealand sides have done well in Super Rugby‚ so when you play the world's best team in their own backyard you pay respect to that‚” Proudfoot said.

“You prepare yourself for that challenge and regardless of what's at stake later in the year‚ you rock up here respecting the challenge.”

The Springboks sprung a surprise on the rugby world when they beat the All Blacks in Wellington last year.

Going into the game they had lost two consecutive tests against the Wallabies and the Pumas‚ but pulled themselves together for what was one of the games of the year.

The significance of last year's 36-34 win isn't lost on Proudfoot‚ but he also sees it as a building block for the Rugby World Cup.

“It was the first time in 10 years and our first win in Wellington in a long time.

"It was a significant win but I suppose every underdog gets its day.

"We don't pay too much credence to that though as we've been working very hard on improving as a squad towards the World Cup‚” Proudfoot said.

“The World Cup preparations started in 2018 when the coaching staff changes and SA Rugby went in a new direction.

"We're a happy squad and you can see with the evolution‚ we're looking to move in a new direction with the style of rugby we're playing.

"We've still got a month or two and there's still a lot of work that still needs to be done.”

New Zealand also sent a youngish side to Argentina last week and were fortunate to win 20-16 in Buenos Aires.

Argentina‚ as South Africa have learnt over the recent years‚ are a team that can't be underestimated.

But he also expects the All Blacks to play in a similar manner to the way they played when New Zealand beat the Boks in Pretoria last year.

“The Argentinians have been doing well this season and to go there with a young side‚ exposing their depth and coming away against a seasoned international team‚ I'd be very happy.

"I'd take a lot out of that culture and mindset‚ which can be quickly transferred to their wider group.

"It bodes well for the strength of their squad‚” Proudfoot said.

“We'd take a lot out of it and they're (All Blacks) a wise coaching team. Their plan will be different and I think similar to what they had when they played us in Pretoria last year.”