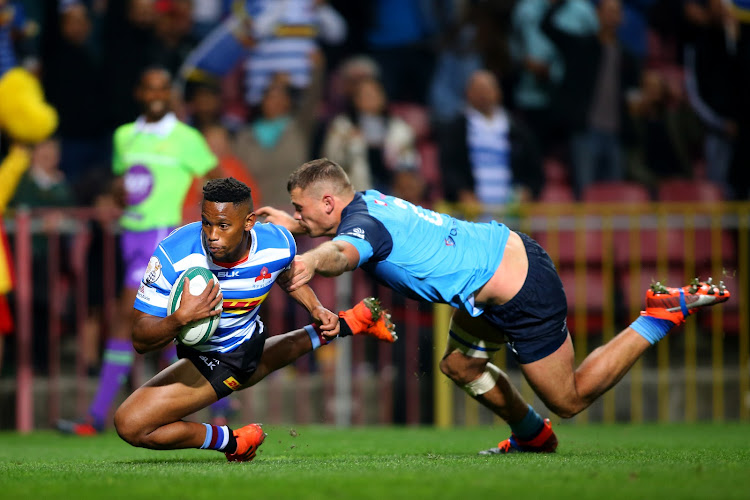 Craig Barry of Western Province crosses to score a try during the Currie Cup match against the Blue Bulls at Newlands Stadium in Cape Town on July 13 2019.
Image: BackpagePix

WP outscored their old rivals by three tries to one but the final score flattered the home team slightly‚ especially as they somehow made it to halftime with the scores level at 5-5 after a dominant 40 minutes from the Bulls.

But in the context of a short campaign (each team only has six matches)‚ a win against a team as good as the Bulls was all that mattered for Dobson.

“We were completely aware that many of their players had played in a Super Rugby quarterfinal three weeks ago and a friendly against the Pumas last Friday while we had been out of action for a month‚ so it was job done‚” Dobson said.

‘We were rusty and were trying a lot of new combinations‚ so it was about gutsing it out.”

In the opening exchanges the Bulls managed to find space out wide and put WP’s defence under huge pressure. Dobson was surprised they veered from that tactic and started playing narrower‚ which allowed his team to come into the match.

WP’s scrum dominated throughout the contest‚ which also gave them a foothold in the game.

“We didn’t really get going with our mauls because we wanted to preserve energy and focus on scrums on our ball‚” Dobson said.

“I know it’s not the most progressive tactic but you have to play what the opposition presents you.

“We could have got a bit more reward there. Our pack did well‚ but that’s a really good Bulls backline.

“Early on they moved the ball wide and put us under pressure. When they look back they will realise they should have continued stretching us coast-to-coast.

“With two physical centres they have‚ a skilful 10 (Manie Libbok) and those two strikers (wings Cornal Hendricks and Rosko Specman) it was tough.

"We defended well to keep that backline to five points. It was a good effort.”

Some old problems from Super Rugby resurfaced for WP‚ particularly in the first half‚ when they failed to score when they had created good opportunities. Three times WP came within inches of scoring only to be held up or lose the ball close to the line. Captain Chris van Zyl admitted to some frustration.

“We had spoken about having patience on attack in the week so that was a bit frustrating‚” Van Zyl said.

“The ball was a bit slippery but we had some good offloads going. But close to the line we needed to be more patient and conservative.

"Technically we are not there yet‚ but I saw some nice things on defence and our interplay was encouraging.”