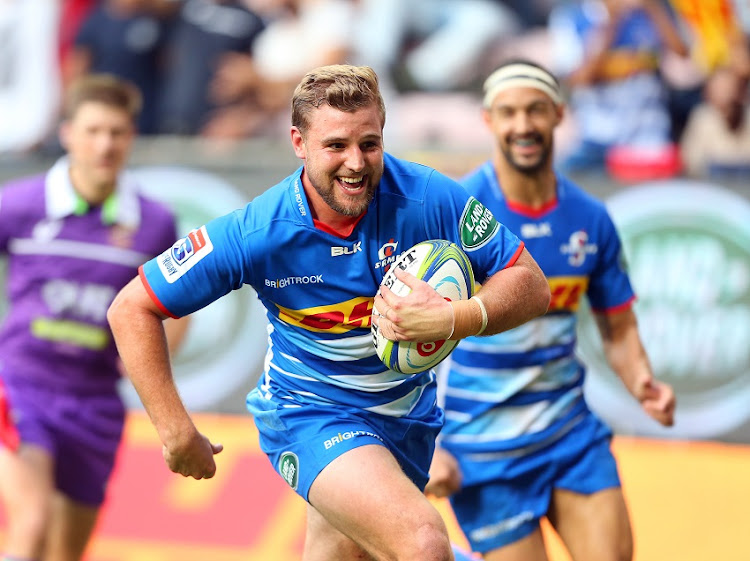 Jean-Luc du Plessis of the Stormers scores a try during the Super Rugby match between DHL Stormers and Highlanders at DHL Newlands Stadium on May 25, 2019 in Cape Town, South Africa.
Image: Carl Fourie/Gallo Images/Getty Images

Despite over 30 caps for the Stormers in Super Rugby‚ flyhalf Jean-Luc du Plessis will make his Currie Cup debut for Western Province at Newlands this weekend.

Du Plessis will lead the line when WP take on the Blue Bulls in the 2019 season-opener in Cape Town with young wing Edwill van der Merwe to also make his first Currie Cup appearance.

Injuries have hampered Du Plessis’ young career and since his Super Rugby debut in 2016‚ a range of hip and groin problems have routinely cut him down before the Currie Cup began.

Van der Merwe earned three Stormers caps at the back end of the 2019 campaign and showed tremendous promise. Coach John Dobson has rewarded that form with a cap.

Du Plessis will form a halfback partnership with Justin Phillips‚ with Dan Kriel and Ruhan Nel in midfield alongside him.

Van der Merwe is on the right wing and will be joined in the back three by Seabelo Senatla and fullback SP Marais.

Carlu Sadie‚ who was so impressive for the Lions in Super Rugby this year after the Stormers loaned him out‚ is back in Cape Town and takes his place on the bench alongside Kwenzo Blose and hooker Chad Solomon.

Salmaan Moerat joins Captain Chris van Zyl in the second row‚ with JD Schickerling set to make his return from injury from the replacements bench.

No.8 Juarno Augustus is also back from injury and is joined in the loose trio by flanks Jaco Coetzee and Ernst van Rhyn. Coetzee was arguably the Stormers’ most consistent forward in Super Rugby.

Dobson said that given the single-round format of the Currie Cup‚ it is vital that his team make a strong start this weekend.

“We have had a good pre-season and the focus is on making sure we can deliver from the word go this season.”