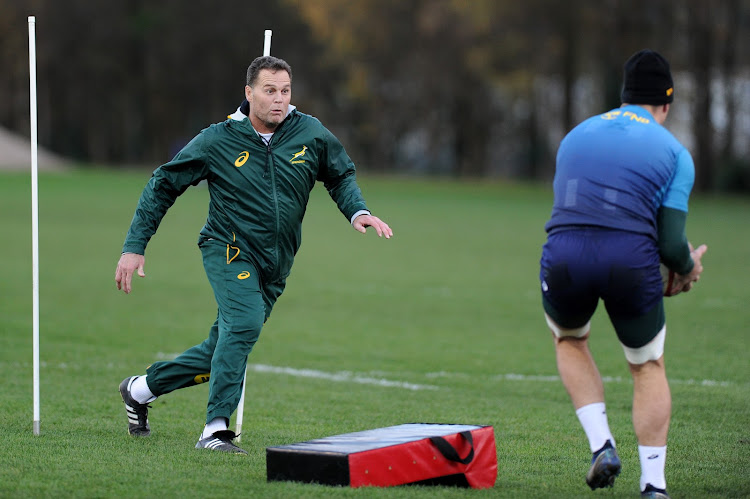 The Currie Cup may be a watered down tournament but the significance of this year's event is not lost on Springbok coach Johan “Rassie” Erasmus.

However‚ the Springbok coach warned that it would be difficult for new players to fight their way into Springbok reckoning through the tournament.

“I don’t think anyone new in the Currie Cup will play their way into the Bok squad.

"I think if it was someone who was injured and someone who we have been looking at..... but no one new will play their way into the team through the Currie Cup‚” Erasmus said.

“I know it’s the wrong thing to say but it is not realistic. We have a lot of guys who just missed out but who we are monitoring.”

With a number of key and fringe national team players carrying injuries of varying degrees‚ match fitness becomes a crucial factor in an international season that'll only consist of four Tests plus a warm-up game before the World Cup opener against New Zealand in Yokohama on September 21.

While also announcing that Springbok captain Siya Kolisi would have to take part in the Currie Cup in order to prove his fitness‚ the domestic door has also been opened to other injured Springbok players who need to get into shape for Japan.

It could be a sign that Erasmus has learnt from other international campaigns and the harsh lessons of taking players who aren't fully fit.

The Currie Cup‚ which has been brought forward this year to avoid a clash with the World Cup‚ starts on July 12 when the Sharks host the Griquas at Kings Park.

The final will be played on September 7‚ just under two weeks before the World Cup opening game between Japan and Russia in Tokyo.

Those who could take part in the Currie Cup could have an opportunity of taking part in most of the games if they are given an opportunity.

“With the majority of the squads being young‚ it's always nice to have some experienced players back because they have the know-how and that makes our jobs easier‚” Everitt said.

"They also impart a number of lessons to the juniors‚ so that's always a win-win situation and the young players enjoy having the senior players around for the tournament.”