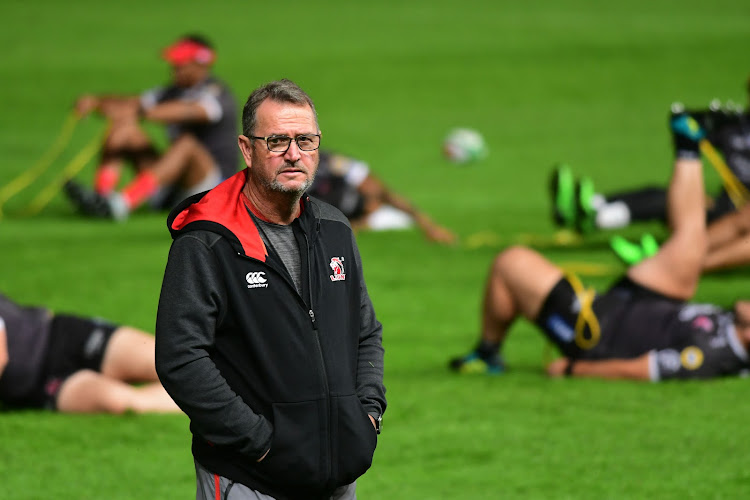 Lions coach Swys de Bruin reckons his team’s failure to reach Super Rugby’s quarter-finals‚ having been in the three most recent finals‚ isn’t a sign of regress.

There was a hint of defiance in De Bruin’s tone following his team’s 48-27 defeat at the hands of the Bulls at Loftus at the weekend‚ which served to dump the Lions from this year’s competition.

“Would you say so?” he turned on his interrogator.

“We lost 13‚ 14 players. We played 11 under-21s this season. That’s not going backwards. I’m excited. It is bad that we lost but tomorrow the sun will shine again and will still have young talent coming through‚” said De Bruin.

He then reached for the few positives.

“If I asked you at the start of the season ‘who’s Vincent (Tshituka)‚ who’s Nathan (Macbeth)?’ I can name 11 players like that.”

Indubitably‚ however‚ their defence has been the area in which the Lions showed the most regress. Only the lowly Sunwolves and the dramatically fading Melbourne Rebels conceded more this season.

“That will be big work on‚” conceded the coach.

“No doubt about it. I don’t think it is a system thing so much as a tackle thing. We need a good Currie Cup to rectify that.”

It certainly didn’t help their cause that their defence coach Joey Mongalo was found guilty of indecent assault in an Australian court during the course of the season.

De Bruin‚ who could have cried wolf about decisions that may have altered the course of their season‚ remained gracious.

In the second match of the season they lost in the 83rd minute to the Stormers at Newlands but only after the match officials’ gaffes helped the hosts get traction.

Reflecting on their defeat at the hands of the Bulls‚ De Bruin doesn’t believe the score line was a true reflection of the match.

The Bulls did‚ however‚ run in seven tries to the Lions’ two. Given the players they’ve lost in recent seasons and the injuries they’ve suffered in this campaign‚ it perhaps is no shock that the Lions slipped down the order this season.

They will take solace from the fact that their renaissance only really kicked in after the last Rugby World Cup when some of the country’s top talent drifted off.

Next season may throw them a similar lifeline.