Exquisite Am strikes late as Sharks down Stormers 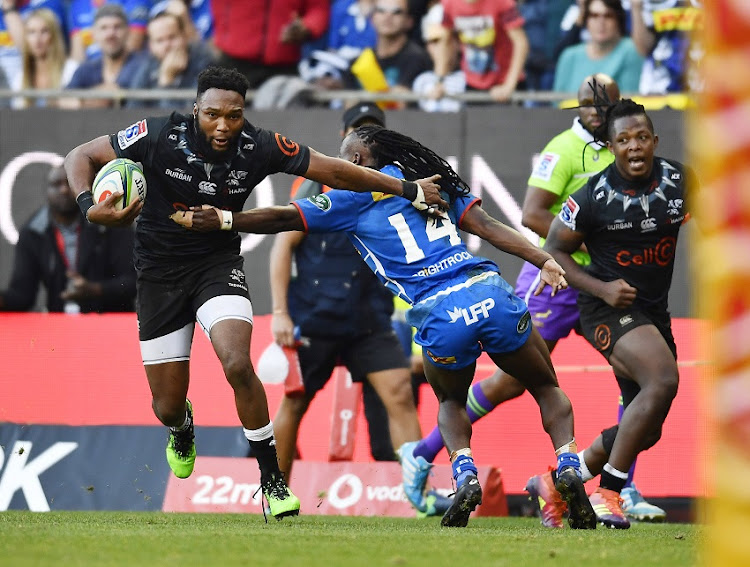 Lukhanyo Am of The Sharks scores a try during the Super Rugby match between DHL Stormers and Cell C Sharks at DHL Newlands on June 15, 2019 in Cape Town, South Africa.
Image: Ashley Vlotman/Gallo Images

Centre Lukhanyo Am is the toast of Durban after his injury-time try secured the Sharks a place in the Super Rugby play-offs by seeing off the Stormers 12-9 in a dour arm-wrestle that lacked quality but not commitment.

The Stormers appeared to have the game won, but the Sharks launched a spirited attack in the dying embers of the game.

The Stormers eventually ran out of defenders as the Sharks took the ball through eight phases before Am ghosted through a last, weak tackle, to end a miserable contest.

The win moved the Sharks to 37 points on the standings to briefly move to fifth on the overall log with the Bulls and Lions still to play.

The Sharks won’t know the identity of next week’s opponents or whether they’re travelling to Buenos Aires, Canberra or Wellington yet, but that is a problem for Sunday.

The reality is that neither of the teams could have felt aggrieved if they missed the play-offs while the Sharks are rather fortunate that half the competition qualifies for the post-season.

Injuries were been a huge factor in the disjointed performance from both sides with the home team losing No 8 Jaco Coetzee and lock Cobus Wiese before half time while the Sharks lost wing Makazola Mapimpi early on. Prop Tendai Mtawarira also withdrew before the match.

Given the Stormers’ already lengthy injury list, just keeping 23 players on the field at the moment is a challenge for coach Robbie Fleck while counterpart Robert du Preez must feel similarly.

The Stormers typically created several chances and couldn't convert while the Sharks were largely one-dimensional on attack.

Rhyno Smith’s 99-metre intercept for the only try of the first half, summed up the state of both teams.

The Stormers, heavily on attack on and seemingly sure to score, couldn’t force the ball after numerous drives. When they flung the ball wide, Smith shot up and cleverly fly-hacked Josh Stander’s pass 20-metres upfield, chased and scored down the other side.

When the Sharks took the ball through 21 phases in the game’s opening exchanges, they couldn’t bash or think their way through the Stormers defence. Smith’s piece of opportunism was the only time they looked like scoring until the last minute.

But the Stormers were no better. They only had a lone Josh Stander penalty to show for their efforts in the first half while hooker Bongi Mbonambi earned a yellow card for a forearm into the neck of Louis Schreuder.

That compounded the home team’s problems but they hung in thanks to a scrum that dominated and the Sharks own shortcomings.

The breakdowns were messy while both teams favoured one-off runners as their main attacking ploy.

It was a case of two blunt instruments striking each other over and over and expecting a different outcome.

The closest either side came to creative rugby was the Stormers’ attempts to use centre Damian de Allende as a playmaker.

He was often seen running, jinking, twisting and turning trying to seek holes in the Sharks defence.

But without any teammates remotely on the same wavelength and able to create options for him to play into space, he ran down blind alleys all day.