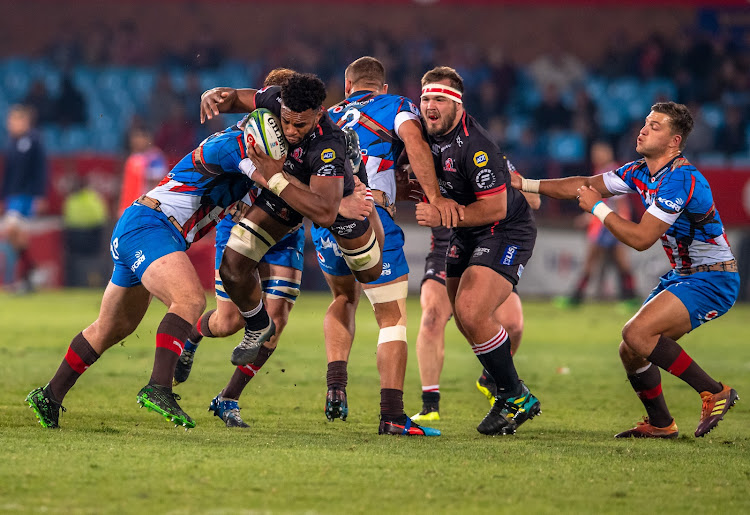 Vincent Tshituka of the Emirates Lions in action during the Super Rugby match between Vodacom Bulls and Emirates Lions at Loftus Versfeld on June 15, 2019 in Pretoria, South Africa.
Image: Anton Geyser/Gallo Images

The Bulls overcame an early scare to beat the Lions 48-27 and take the last Super Rugby playoff spot after Saturday’s derby at Loftus Versfeld.

The Lions joined the Stormers into Super Rugby inactivity when their campaign went up in flames here on Saturday.

They fell well short in their quest for a log point out from this match after the Chiefs and the Highlanders leapfrogged them on the points table on Friday.

This result means the Bulls will travel to Wellington to face the Hurricanes in the quarter-finals, the Crusaders host the Highlanders, the Chiefs travel to Buenos Aires to face the Jaguares, while the Sharks will cross the time zones en route to Canberra where they’ll face the Brumbies.

Frankly, the Lions were well beaten here. They showed courage to fight back in the middle third of the match after the score ballooned in the Bulls’ favour. The Bulls however finished the stronger side and put the issue beyond doubt.

It was clear inside the first quarter the only way the Lions were going to achieve their objective was if they were able to hanging onto the Bulls’ coattails.

That was going to require some effort as the Bulls enjoyed gainline dominance, they mauled and scrummed better and the snuffed out threat by scrambling better than the visitors when matters started to even out in the middle third of the match.

Curiously, the first scrum set only in the second half – a first time occurrence in Super Rugby.

The match started at breakneck speed and it were the Lions who delivered a sensational opening blow. In fact, they scored before the Bulls could touch the ball in open play.

Aphiwe Dyantyi tiptoed past the Bulls’ chase line from the kick-off and by the time he reached the halfway line he offloaded to Hacjivah Dayimani who proceeded to palm off Rosko Specman en route to the tryline.

The clock showed 15 seconds by the time he dotted down.

The Bulls however played like a team possessed in the opening quarter. It were they who built the phases and ran onto the ball with rock hard conviction.

Flank Marco van Staden and lock RG Snyman bent the Lions’ defence and they continued to wreak havoc for the remainder of the match.