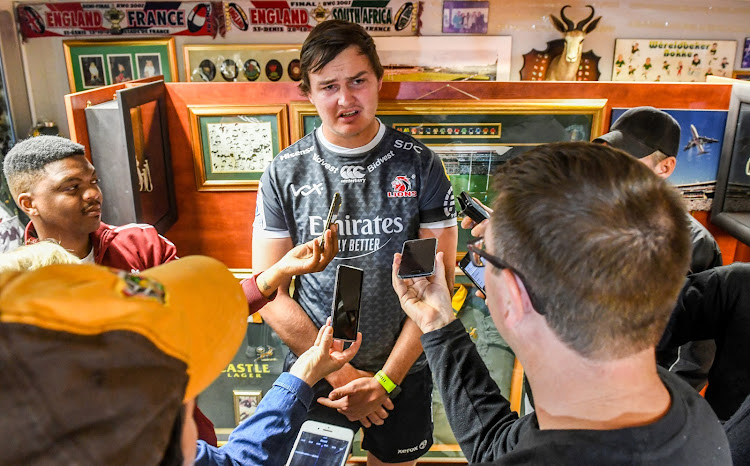 Stop dwelling on the injured players and back the youngsters‚ a rookie pleaded among the relics.

The men he was addressing may be showing their age but newbie Lions’ lock Reinhard Nothnagel was surrounded by artefacts in the Ellis Park museum.

You got the sense the 21-year old had grown tired of reading less than rosy bulletins of Lions’ injury list.

His upbeat disposition‚ however‚ is probably just what is needed as the team goes into their do-or-die Super Rugby clash against the Bulls at Loftus on Saturday.

“We should stop focusing on the guys who are injured. Let’s back the youngsters. They’ve come through the system.

"Guys like Vincent Tshituka are jolling great at the moment‚” he said in reference to the loss of Kwagga Smith.

“Kwagga is a great loss for us. He’s an inspirational player and he has had a great season. The Lions tend to take setbacks and turn it into something positive‚” said Nothnagel.

Notwithstanding the fact the Lions’ pack will be without Smith‚ Warren Whiteley‚ Sti Sithole‚ Stephan Lewies‚ Jacobie Adriaanse and Lourens Erasmus the rookie believes they still have “an amazing pack.”

Although he is a little indignant of the number of injuries‚ it has helped thrust him into the spotlight.

“Five‚ six weeks ago I didn’t even know if I was going to play Super Rugby. I’m definitely excited. It is every little child’s dream to run out for your union‚ whether it is the Bulls‚ the Lions or the Stormers‚” he said.

Although he has healthy respect for RG Snyman and Jason Jenkins‚ men he is likely to face this weekend‚ and think the world of Bakkies Botha and Victor Matfield he only has eyes for All Blacks talisman Sam Whitelock.

“He’s won two World Cups and he’s won Super Rugby. He’s basically done everything you can do in world rugby.

"He’s got 100 All Black caps. As a role model he is definitely one to look up to.

“He’s the line-out captain. He controls the lineout. He’s got a physical presence around the breakdowns.

"He’s just a leader‚ on and off the field‚” he said about the player you can set your clock by in the All Blacks and Crusaders pack.

The fact that Whitelock is his ultimate role model says something about Nothnagel.

He is not your typical bash or be bashed South African lock and brings a more calculated approach to second row play.

“I don’t believe in psyching yourself up for a game‚" he said.

"If you prepare well throughout the week‚ you know your processes‚ you go out and do your job. If you put the work in you will definitely get the reward. You have to perform under pressure. I like that.”

His fledgling career continues to take lessons on board.

“The Lions were ranked the third best club in the world last year‚" he said.

"Then you come up against a side like the Hurricanes. They really outsmarted us around the rucks. We can learn a lot from them.

“They bend the rules the whole time and they get away with it. That’s why the All Blacks are also the best team in the world because they push those boundaries all the time.

“It’s about playing what you see‚ not just what the coach told you.

"If the coach tells you ‘do this’‚ don’t just do that. You must do what you think is beneficial to your team in the moment. If it comes off‚ fine‚ if it doesn’t come off‚ the team will always back you.”

This free thinker may yet have a future.