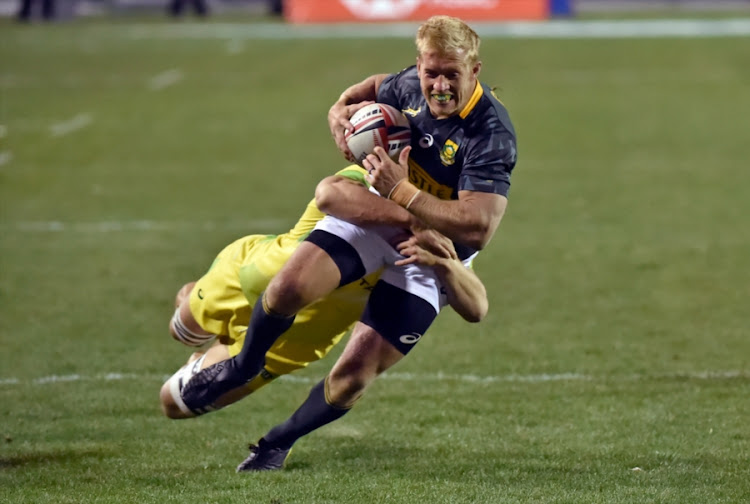 Kyle Brown of South Africa runs with the ball under pressure from Australia during day 2 of the 2018 HSBC USA Sevens at Sam Boyd Stadium on March 03, 2018 in Las Vegas, United States of America.
Image: David Becker

Kyle Brown‚ one of the true stalwarts of the South Africans Sevens programme for more than a decade‚ had decided to call time on his illustrious career.

Two serious knee injuries in the past two years have curtailed 32-year-old Brown’s appearances for the Blitzboks on the World Sevens Series.

As coach Neil Powell rebuilds the team with a view to the 2020 Tokyo Olympics and beyond‚ Brown’s contribution at the top level has come to an end after an impressive career.

He made his debut for the Blitzboks in the 2008/09 season in Dubai and also captained the side for two seasons‚ with his last stint as skipper coming in Singapore in 2018.

Brown captained the team to an historic first gold medal in Rugby Sevens at the Commonwealth Games in 2014 and also won bronze with Team South Africa at the 2016 Olympic Games in Rio.

Brown was named in the tournament Dream Team afterwards.

As a Blitzbok‚ Brown was part of all three Springbok Sevens squads that won the HSBC World Rugby Sevens Series in the 2009‚ 2017 and 2018 seasons.

Brown became the most capped South African in the World Series when he represented the Blitzboks for the 69th time at the Sydney Sevens earlier this year‚ moving past the long-standing mark held by Frankie Horne.

That was also his last appearance for the team and his tally has since been bettered by Branco du Preez‚ who played in his 71st tournament in Paris last weekend.

"I played my first tournament with the team in December 2008‚ not knowing that this team would become my home for the last 11 years and my entire professional career‚” Brown said.

“The last decade has passed quicker than I could have imagined‚ I have traveled to some incredible destinations and enjoyed experiences that some could only dream of‚ for that I will always be grateful.

"I have been fortunate to have ridden this roller coaster that is sevens rugby through many unforgettable moments. Some highlights are medaling at the Olympics and Commonwealth Games and taking our home tournaments in George‚ Port Elizabeth and Cape Town.

“People always want to know what is special about this team‚ the answer is seemingly simple – the people. People have always been the heart and soul of this team‚ and the dominant reason why I have stayed with this team for so long.

“People shape this team and the team continuously shapes them‚ it’s a cycle that I have always admired and hope that it continues on the progressive path that it has been on.

“To the special group of players who have come and gone‚ and to those that remain‚ thank you for creating the perfect environment to call home.” Powell also praised Brown.

“I was privileged enough to play with Kyle and later coach him and in both roles‚ he remained a gentleman‚ a friend and a player who cares deeply for the Blitzboks‚” said Powell.

“Few people realise how hard he had to work to get back into contention after two consecutive knee operations.

“He showed tremendous guts and determination to regain his competitive edge following those injuries‚ and did so with such a positive mind-set that it enhanced the Blitzboks on the world stage.”