Blitzboks return to earth after two years of highs 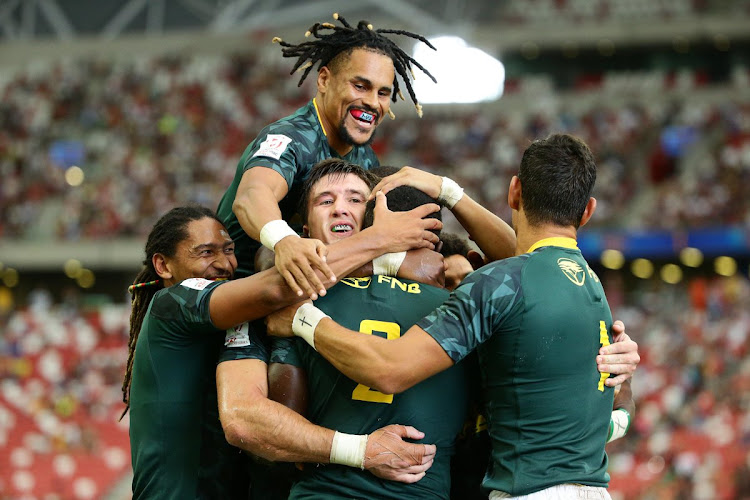 The Blitzboks’ season ended with a bronze medal at the Paris leg of the 2018/19 World Sevens as Fiji claimed the title they last won three years ago.

The effort in Paris was reflective of the Blitzboks’ season‚ as they finished the campaign in fourth overall after winning back-to-back titles over the previous two seasons.

It was always going to be a difficult year for coach Neil Powell because he had to rebuild a team that lost several stalwarts.

Injuries to other experienced players such as Cecil Afrika and Kyle Brown‚ as well as a swathe of injuries throughout the season‚ tested the Blitzboks’ depth.

In Paris the Blitzboks topped their Pool comfortably‚ then thrashed Samoa 40-7 in the quarterfinals.

But in the semi-final they were humbled 33-7 by New Zealand before bouncing back to beat the US 24-7 in the bronze medal match.

That type of inconsistency defined the season.

“I was very happy about the way we played against Samoa‚ the guys really pitched up for that one‚” Powell said.

“Against New Zealand‚ we unfortunately did not do that well and that was disappointing.

Luckily we came good again against USA to end the tournament and year off on a positive note.

“Somehow inconsistency crept into our play and that was a critical element of our season. We will look at that in our review and how we can improve next season.

“We were targeted at the breakdowns‚ especially by the likes of New Zealand‚ and that is an area where we need to get better.”

Powell said it was a tough season for him as a coach: “We had senior guys leaving and new players coming in‚ which challenged our culture. We started off poorly‚ but certainly grew in the latter part of the season‚ with the two tournament wins a highlight of the season.”

Fiji’s 33-14 semi-final win over the USA in Paris secured them their fourth title since the series began in 1999.

But with the Olympics a year away‚ the USA have emerged as a real gold medal contender in Tokyo in 2020. Fiji‚ the USA‚ New Zealand and South Africa secured the four automatic qualifying berths for Tokyo as the top four on the World Series standings.

The fact that the Blitzboks scored 34 points fewer than they did on their way to the title in 2018 despite winning two tournaments in each campaign‚ underlined their inconsistency in 2019.