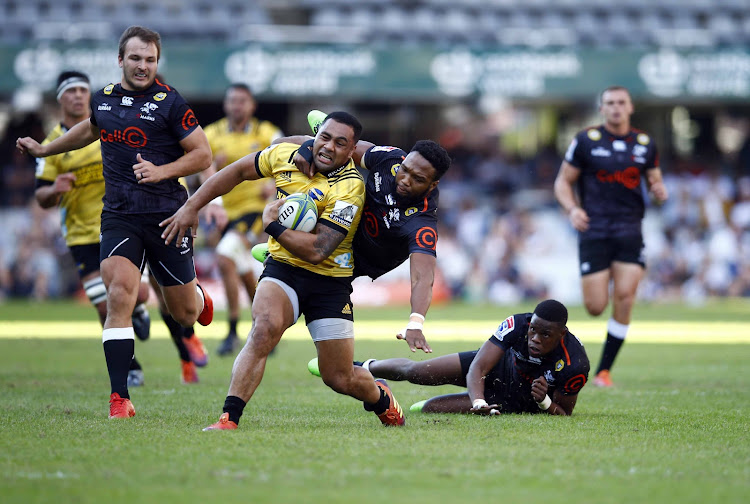 The Sharks’ Super Rugby play-off ambitions hang by a thread after the Hurricanes scored a 30-17 win at King’s Park on Saturday to end a four-match losing streak by New Zealand teams in Durban.

The Hurricanes, led by an inspired performance from openside flank Ardie Savea, were always in front after scoring the opening try after seven minutes.

It was a niggly contest with several flare ups and scuffles and in between the rugby never rose to memorable heights.

At one stage the Hurricanes led by 17 points but the Sharks, who dominated territory and possession, clawed their way back into the contest when their forwards edged the tight battle.

By the hour mark the Sharks were on top. Flyhalf Curwin Bosch was enjoying a good game while outside backs such as fullback Aphelele Fassi, Lukhanyo Am and Makazola Mapimpi were also effective.

Inexplicably though, coach Robert du Preez yanked Fassi on 6 1 minutes after his first mistake of the afternoon, moved Bosch to fullback and brought Rob du Preez on at flyhalf.

From that moment the momentum of the match shifted to the Hurricanes and they scored 10 unanswered points, despite suffering a red card for flank Vaea Fifita, to win going away.

It’s not that Du Preez junior did anything wrong, but the changes, which appeared reactionary to one mistake, changed the Sharks shape and cohesion.

There was no guarantee the Sharks would have won had the changes not been made, given how effective the Hurricanes were with less field position and possession.

The Hurricanes took away the Sharks’ major weapons in the first half by avoiding lineouts as much as possible and soaking up pressure before counter-attacking with venom.

It was a tactic that saw the visitors losing the possession and territory battle but winning the only skirmish that counted – the scoreboard.

The Sharks made virtually all the running but went into the break 10 points down.

The Hurricanes defence was granite-like, and when chances came, they generally made the most of them.

Their first try came from broken play with Beauden Barrett (who else) creating the try when he accelerated into a hole that prop Coenie Oosthuizen had no chance to close.

When the tackle was eventually made, Beauden popped the ball to brother Jordie, probably reconstructing a move they perfected in the family back garden a decade ago. Jordie ran unopposed to the line.

Later abrasive centre Ngani Laumape, who was a handful all day, scored when running support from a rare lineout close to the Sharks’ line.

At that point the match was running away from the Durban side, but they stayed in the game thanks to a Fassi try a minute before halftime.

The Du Preez brothers, Jean-Luc and Dan, were instrumental in creating the try after some strong carrying. But it was centre Am who provided the scalpel by holding up two defenders to create space for Fassi to ghost through.

A Juan Schoeman try after the break put the Sharks in the contest but the Hurricanes added a third try form Wes Goosen to seal the deal late in the game.