Esterhuizen can't put finger on the Sharks' inconsistency this season 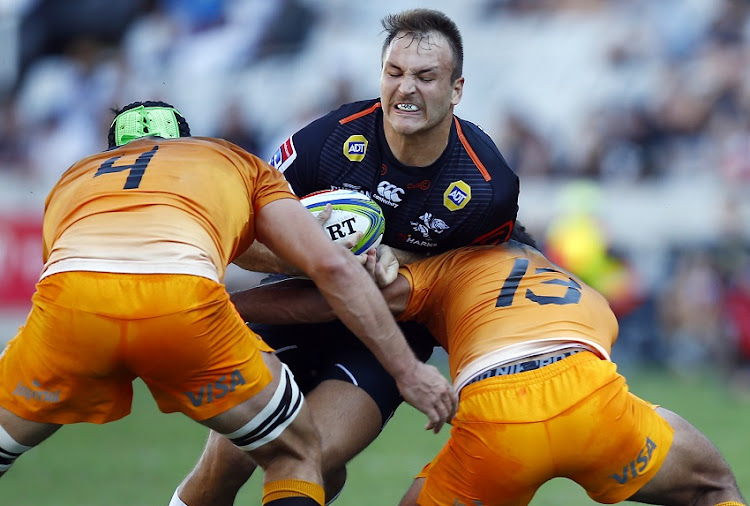 The Sharks' bulky inside centre Andre Esterhuizen doesn't quite comprehend why they've had a dodgy record against their South African counterparts this season.

The Durban side have lost two home SA derbies against the Bulls and the Stormers and were carted in the corresponding fixture against the former.

They had some success against the Lions‚ who they host this weekend but nothing can be taken for granted when the Sharks play‚ especially at home.

They are the true definition of Jekyll and Hyde in the South African Super Rugby sense.

“I don't have a reason for that but we like touring but I also think it's a mindset thing that we need to get right.

"We have to play at our best against South African teams. We always want to beat the overseas guys but it has to be a priority to beat SA teams‚” Esterhuizen said.

“It's not like we don't want to beat them‚ but I do think it's a mindset thing.”

Under Robert du Preez‚ the Sharks have preferred to be on the road and at home‚ they've been quite charitable.

They were on the receiving end of dispiriting defeats against the Reds and the Jaguares while the Bulls and the Stormers didn't even need to get out of first gear.

There's nothing threatening about King's Park and this concerns Esterhuizen.

However‚ he also understand the Lions will be baying for blood after the 42-5 home hiding the Sharks subjected them to earlier this season.

“I certainly hope so. We've had two or three bad losses at home and that's something we don't want.

"There's a lot of positivity for this weekend and as a group‚ we're not going to play with a fear to lose. We just going to play to win‚” Esterhuizen said.

“The Lions have been a bit like us with one game up and the other game down.

"It's a bit of inconsistency but they remain a dangerous side and they score a lot of tries. The previous result we had against them means nothing. It's a new game and we've done our homework.”

The SA conference hasn't quite taken shape but the Bulls (32) and the Jaguares (32) took major playoff steps last week with wins against the Rebels and the Hurricanes respectively.

The table-toppers have early games against the Brumbies and Waratahs respectively that'll place the Sharks (29) and the Lions (32) under pressure.

With the pointy end of the round-robin stage on the horizon‚ Esterhuizen understands the significance of each game.

“Every game is vital from now on and there's not many points separating the teams in our conference.

"We understand the important of each game but we're not putting pressure on ourselves. We're going out to enjoy the game and play for each other. That's how you get results.”