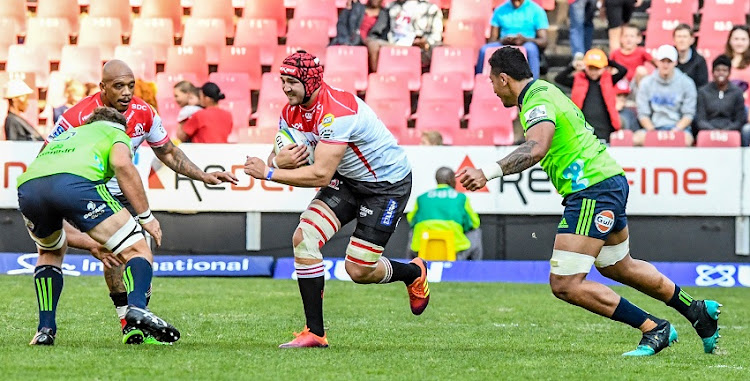 Cyle Brink of the Lions with possession during the Super Rugby match between Emirates Lions and Highlanders at Emirates Airline Park on May 18, 2019 in Johannesburg, South Africa.
Image: Sydney Seshibedi/Gallo Images

He was on the brink of making his Test debut last year when an untimely knee injury drove him to the edge of despair.

A teammate fell on Cyle Brink in the lead up to the Test against Argentina in Durban which tore his right patella tendon in training.

That was after a nerve and shoulder injury prevented him from a potential introduction to Test rugby a few months earlier.

“It came at the wrong time but if you think about it that way it is going to upset you.

"I thought about it as a lesson and maybe there is a bigger plan.

"Hopefully I can play well and the opportunities come again‚” said a philosophical Brink.

Prolonged time on the sidelines can drive some up the wall but it can also steel you mentally.

“Flip‚ long injuries are always a mental battle‚" he said.

"You just stay close to family and friends and they help you come out better afterwards.”

He is now hoping the rugby gods smile on him and he gets an extended run to again stake his claim.

“Anything can happen in rugby‚" he said.

"It depends on the day. You can pick up an injury or lose a bit of form. I hope so. I’ve been working towards getting some proper game time.”

Following eight months of rehabilitation the bulky flanker made his return to action‚ albeit a little short of a gallop against the Sharks at Ellis Park earlier this season.

Keen to take up where he left off last season‚ Brink was swept away along with the rest of the Lions’ pack as the Sharks thundered to a shock 42-5 win.

The Lions travel to Durban for the return clash on Saturday and they will be forgiven for wanting to set the record straight.

“Of course‚ it is never nice to lose to a South African side‚" he said.

"Also‚ it was my first game back after eight months out.

"It was a little bit sore to lose against them here at Ellis Park.

"Obviously I would love to get one up on them. That will be great.”

If the Lions are going to meet success in Durban they will have to quell the physical onslaught from the Sharks who come off a bye.

The brutish Du Preez brothers who are ahead of him in the Bok pecking order will be operating opposite Brink.

"They are good players and I always want to test myself against the best players in Super Rugby.

"I don’t think it is something I worry about. It might be a distraction if I worry too much about the off the field stuff.

“These days rugby is always physical. Even the Highlanders were a physical side.

"I can’t really look at the opposition. Rather focus on your own game. Try and improve what you are doing wrong.”

Brink‚ who says he likes going to the gym and playing hard‚ reckons his role in the team hasn’t changed. “The coaches expect the same thing from me‚" he said.

"They haven’t put me under any pressure. They’ve said ‘play your game’. The more you play‚ the form will come.”