Branco makes it 70 in London 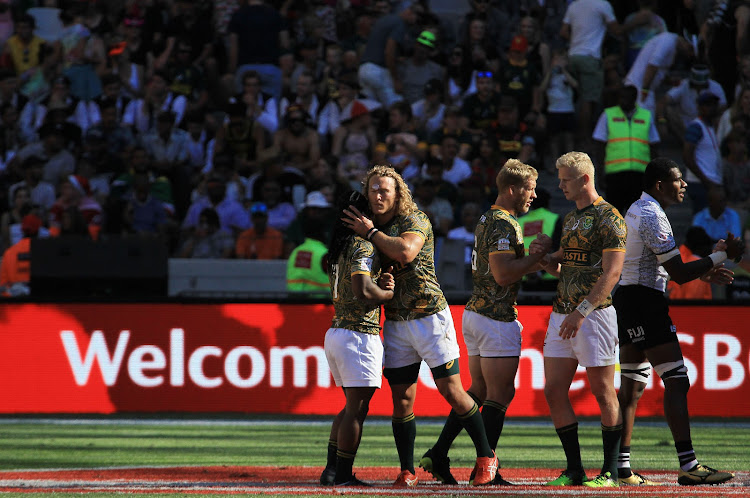 After nine years in the colours of the Springbok sevens‚ sweeper Branco du Preez will become the most capped Blitzboks of all time at this weekend’s London leg of the 2018/19 HSBC World Sevens Series.

When Du Preez takes the field against Japan in SA’s Pool A match at Twickenham on Saturday‚ he will earn his 70th World Series cap‚ surpassing the 69 he shares with Kyle Brown.

It highlights his impressive consistency and longevity in a sport associated with brevity.

"Without this team‚ I would not have achieved anything‚" said Du Preez.

"I feel immensely proud of this. And immensely grateful.

"Not only because I am still able to do what I love‚ but to be able to do it with players who symbolize what the Blitzboks stand for. When we landed in London on Monday morning‚ I felt so blessed."

"I remember that try very well‚ especially as I had to beat William Ryder‚ at the time one of the great steppers of the game‚ with a step in order to score in the corner.

"I was so tired lying there‚ but the smile on my face was the biggest ever‚” he said.

Du Preez‚ who hails from George but finished his schooling at the Harmony Sports Academy and Hentie Cilliers High School in Virginia in the Free State‚ has great memories of so many matches and tournaments‚ but he singles out Las Vegas‚ where they won on the occasion of his 50th tournament for the Blitzboks.

"And winning the World Series twice in a row‚ which is something no one can take away from us and something I will remember forever.

"Especially as we had to rely on each other in so many of those battles‚ where we had to support each other‚ as in that statue‚" he said.

"We want to go out and play‚ no doubt‚” said Du Preez.

“My own achievement does not overshadow what the team want to achieve‚ so the focus will be pretty much on what we need to do out there. We are all super keen to have a good weekend."

It was not always bright lights for Du Preez‚ who also represented the Junior Springboks in 2010 and played for the Blue Bulls and Golden Lions in a short fifteens career.

"I missed out on selection for the Olympic Games in 2016. I struggled with an injury and form and did not make the final squad‚” he said.

“There is another chance come Tokyo 2020 and I have my mind set on making that squad. To do that though‚ we need to do well here in London to start with‚ in order to qualify as a top four finisher.

“That is where we want to be at the end of the weekend. To get there‚ we need to trust each other and play as a team and be in sync."