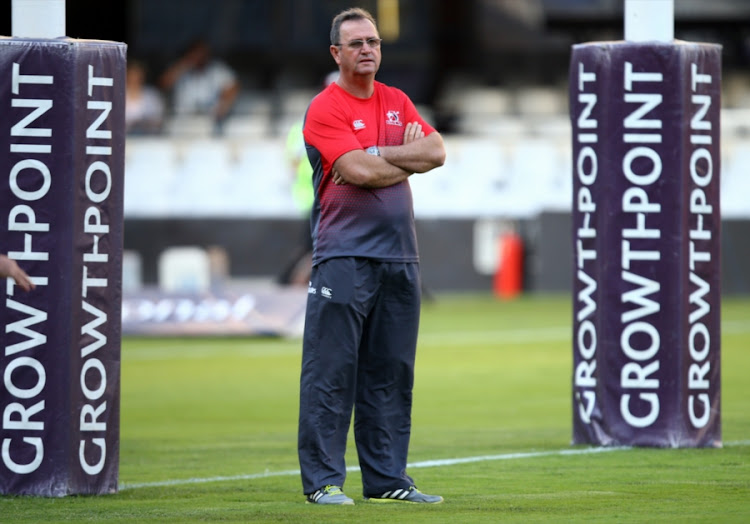 Lions coach Swys de Bruin was dumped straight back into the pressure cooker as he celebrated his 100th match as part of the team’s coaching staff against the Waratahs on Saturday.

De Bruin who has had to seek professional help to deal with stress would have been on the edge of his seat as his side eked out at 29-28 Super Rugby win over the plucky Waratahs.

“Coming off what happened on tour where we had a lot of trials and tribulations‚ as well as a bye‚ which is not always a good thing‚ and given the way we started I thought‚ ‘oh‚ here we go again’.

"There is definitely a feeling of relief‚” said De Bruin.

The Lions were forced to dig deep in match that produced few moments to shout about for the hosts.

“That one try we scored is one of the most beautiful I have seen on this park. We started right in our 22. That lifted the spirit immensely‚” said De Bruin about the move Courtnall Skosan rounded off in the second half.

Against combative opponents the Lions never really hit their stride.

“We are still not good on the ball control‚” said the coach.

“We are not where we want to be. We are very proud we could sneak it in the end.

Their lack of control meant the Lions were forced to momentarily deviate from their usual gung-ho style in the way they approach penalties.

They almost routinely kick for touch but had to opt for a more pragmatic approach with the game in the balance.

Replacement flyhalf Shaun Reynolds kicked for goal to give them a one-point lead and from there they managed to hang on.

Later however they eschewed the opportunity to go for goal with time almost up on the clock succeeding only in losing possession as the Waratahs went in search of what would have been a dramatic win.

“A bloke actually ran in front of where we were seated and said ‘is jy mal‚ skop pale toe’ (are you crazy‚ kick for poles). That is the emotional reaction you get.

“We didn’t exit well all day. What happens is you kick for poles and go four points up they kick off and pin you down in your 22.

"With five minutes left on the clock you give them the opportunity to play. When the pressure builds field position becomes very important. We pinned them down in their area and it worked for us. If it didn’t work I would have taken the blame.

"That’s why we changed our tactics slightly. I have to complement Marnus (Schoeman) and Tyrone (Green) who saved us the day.

"He was just unreal in the corner (when he dived on the ball with the Waratahs’ Curtis Rona looking destined to score). Thanks Tyrone.

“Harold Vorster was also unreal and Lionel Mapoe was good. I was really happy with a lot of the players‚” said the coach.

De Bruin explained that they had to ‘box clever’ with tighthead prop Carlu Sadie withdrawn from battle before the break because of flu.

Waratahs coach Daryll Gibson infuriatingly had to watch his team lose another tight match this season.

They have lost six games with their biggest defeat suffered against the Sharks when they went down by eight points.

“The margins for us this year have been very close‚" he said.

"We show a lot of fight‚ a lot of character but we haven’t been able to close out those close games.

"Different things have let us down at different times over the cause of the season. Some calls didn’t go our way that could perhaps have changed things.”

On that score‚ their cause was hardly aided by a curious 13-3 penalty count in the Lions’ favour.

“The Lions applied good scrum pressure. With that penalty count it is tough to gain any sort of momentum off that‚” said Gibson.

“That was the buzzword of the week. No penalties. Our captain Warren Whiteley was hard on that. Stay out of the rucks. Be clean‚ be good. Funnily enough‚ the games we lost we were bad with the penalties‚” said De Bruin.

The win puts the Lions right back in the frame in the South African conference‚ especially after the Bulls and the Sharks suffered defeats earlier in the round.

The Lions are‚ however‚ hellbent to stay in their process.

Said De Bruin: “The danger for us now is if you start looking ahead. We have to stay focused 20 minutes at a time.”