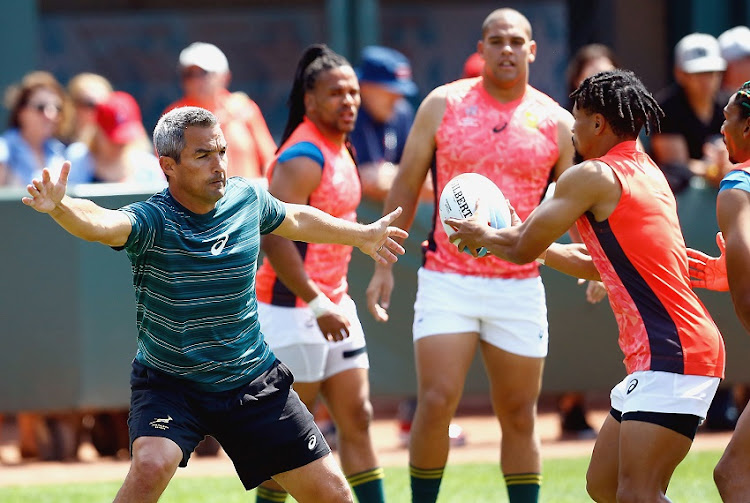 Neil Powell (Coach) of South Africa prior to the quarter final match between South Africa and Scotland on day 2 of the Rugby World Cup Sevens 2018 at AT&T Park on July 21, 2018 in San Francisco, United States of America.
Image: Martin Seras Lima/Gallo Images

Blitzboks coach Neil Powell believes that the current HSBC World Sevens Series campaign has been his most satisfying as a coach.

Despite leading the team to the past two World Series titles‚ which would be obvious highlights‚ Powell says that making a callow collection of individuals become a team over the past six months has challenged and pleased him.

After a slow start to the campaign after losing long-time stalwarts such as Seabelo Senatla‚ Kwagga Smith‚ Cecil Afrika‚ Rosko Specman‚ Dylan Sage‚ Ruhan Nel‚ Tim Agaba‚ Kyle Brown and others to injury and fifteens‚ the Blitzboks have won two of the last three tournaments.

Victories in Vancouver and most recently‚ in Singapore last week‚ have cemented SA’s place in the top four‚ which brings automatic Olympic Games’ qualification.

They won’t manage to defend their title‚ but the foundations for the future have been laid.

“This has probably been my most satisfying season because of where we started and the inexperienced squad we had at the beginning of the competition‚” Powell told TimesLive.

“It’s been hugely satisfying to see the growth of the team and of the individuals. We never wavered in our belief that the longer the season went on‚ the better we would become.

“To see the growth of players such as Angelo Davids and Kurt-Lee Arendse‚ and even guys that have been in the system a little longer like Zain Davids‚ has been immensely satisfying.

“The team has also become tighter as a squad.

"There was a little transitional period where the remaining senior guys had to accept these news guys and vice versa. The new players needed to understand where they stood.

“That took some extra effort from a management point of view and the guys back at the academy deserve credit for helping with the transition.

"It took a little time and there were moments when we were a little nervous about how it was going‚ but we are well on track now.

“But just because we have won two tournaments recently doesn’t mean we are there yet. A lot of hard work lies ahead for us.”

Powell admits to having moments of weakness during the season where he briefly considered making SOS calls to the likes of Senatla and Specman.

But despite having those thoughts‚ he never acted on them‚ rather knuckling down and believing in the conveyer belt of talent coming out of the SA Sevens Academy in Stellenbosch.

“I’ve stuck to my convictions but sometimes it has been difficult because you are human and feel the pressure‚” Powell admitted.

“It’s easy to shift your focus on to things that you think might make you successful instead of sticking to what has worked in the past.

“But Marius (Schoeman) and the coaches at the Academy deserve a lot of credit for giving the young players a good foundation so that they’re ready for the World Series.

“At times I thought about calling Seabelo‚ or a Dylan Sage or a Rosko Specman back. But then I remembered the bigger picture and stuck to the processes of the work we had put in earlier in the season.

“It’s important to have the right people around you so they can give you perspective. Marius and our sports psychologist Dr Jannie Botha have been great in letting me lean on them.”

With just two more tournaments of the campaign to go‚ the Blitzboks are 14 points clear of England in the battle for fourth place‚ and barring massive implosion‚ should be able to secure that automatic qualifying berth.