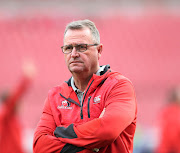 Lions coach Swys de Bruin pointed to the inexperience in his side following their 31-20 defeat to the Brumbies in Canberra.

The defeat is a huge setback for his team considering they still have to cross the Tasman Sea for clashes against the Chiefs and the Crusaders on their Australasian tour.

Again‚ curiously‚ he stressed that his team does not want to be defined by the number of matches they win.

"For us it is not about winning or losing at this stage. I know it sounds weird but it can’t be when you have lost so many guys.

"We lost 13 guys up-front in the last year. The loosehead was 20 years old. The No 8 is 20 and those are the guys we are blooding.

In their last two visits to the Australian capital the Lions had more experience in their line-up and came away with victory. On Saturday however‚ defensive lapses cost De Bruin’s side dearly.

The coach said it proved a turning point in the clash.

"That is a definite work-on for us‚" he said about his team’s leaky defence. "Every chance they had they took. We had chances and we didn’t take them.

"We started well. In the first 10‚ 12 minutes we were right in there. Then we had two soft moments ... 14 points later‚" explained the coach.

De Bruin is a glass half-full kind of bloke and amid the wreckage of another defeat he extricated something he believes worth salvaging.

"I was happy with the attack. We carried the ball better. We have a few guys we are still grooming from our junior system. They did well when they came on.

"There are always positives. For us it is about playing a good brand‚ playing for the crowd.

"There is a bitter taste in the mouth when you lose.

"What do you do? Success is like ice. Tomorrow the sun rises again.

"We can’t be negative now. We can’t go into our shells. We have to work hard and rectify our mistakes. We played well when we wanted to play."

The fact is‚ however‚ the Lions have now lost significant ground on their nearest rivals.

Within the space of two weeks the Lions have gone from conference pacesetters to second-last as the Sharks‚ Bulls and Stormers leapfrogged them.

After suffering a humiliating defeat against the Sharks the Lions were desperate to atone in Canberra. It was not to be.