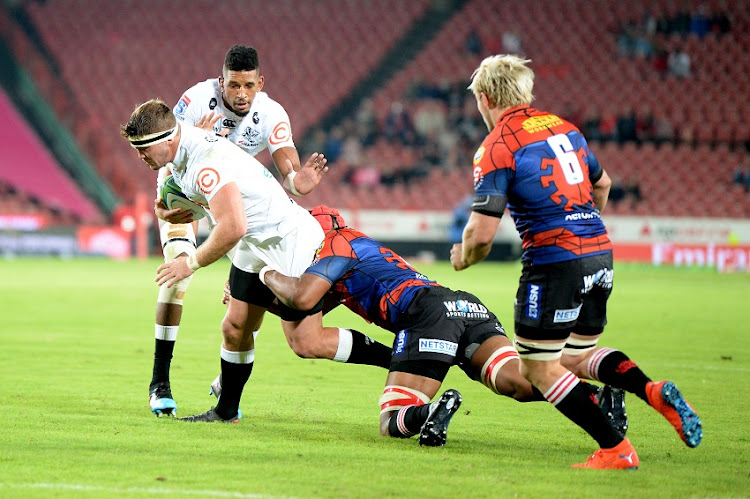 Kerron van Vuuren was needed by the Sharks to step up in no uncertain teams.

After Friday’s successful adventure against the Lions‚ that box has been ticked in the interim.

With the Sharks missing Akker van der Merwe through suspension and Mahlatse Chiliboy Ralepelle having an unresolved drug-testing matter uncomfortably hanging over his head‚ the Sharks have been forced to test their young depth at hooker.

Van Vuuren and the fiery Fezokuhle Mbatha have so far passed with flying colours as they collectively helped quell the Malcolm Marx threat on Friday.

The 23-year-old‚ though. hasn’t taken his rise for granted‚ saying he’s put in the hard yards and is reaping the rewards now.

“Being in this position has come in the blink of an eye but I try my best‚ get my basics right‚ get all my preparation right and do all my planning so when that moment comes‚ I’m not so nervous and I can do the basics well‚” Van Vuuren said.

“This is a combination of a couple of years coming together. I’ve done the rounds and run through the processes. I think it’s time now that I step up to the big leagues.”

Just when Van Vuuren thought he was in the clear after the Marx examination‚ the double whammy of Julian Montoya and the hardy Agustin Creevy awaits when the Sharks host the Jaguares on Saturday.

The latter is one of the best in the business and Van Vuuren has already been warned by his coach‚ Robert du Preez.

“My coach told me that I’m going up against one of the best hookers in world rugby. However‚ that’s perfect and I’m really going to enjoy that.

“I’ll learn a lot from him‚ I’ll gain the necessary experience but I’ll come to the party and I’ll definitely not let him off easily‚” Van Vuuren said.

Having played on Friday‚ the Sharks would have also had good time to survey the Jaguares’ comeback 22-20 win against the Bulls at Loftus Versfeld.

The Jaguares were trailing 20-10 in the last 10 minutes but a brace from Domingo Miotti saw Gonzalo Quesada’s side snatch victory from the jaws of defeat.

“We’ve done a fair bit of reviews on that game. The Jaguares are a quality outfit and technically‚ they’re an international team. We’re definitely going to have to be on our A-game this weekend‚” Van Vuuren said.

Despite their commanding showing against the Lions‚ the Sharks have been prone to maddening inconsistency‚ especially at home. It has not escaped Van Vuuren’s attentions that Sharks haven’t been flash at home either this season.

Wins against the Blues and the Rebels have been interspersed by losses to the Bulls and the Stormers.

“Consistency has been a big chat that we’ve been having. It’s been a troublesome thing for the Sharks in the last couple of years‚” Van Vuuren said.

“We’re going to take it on a week-by-week basis where we focus on the game we have on the weekend.”