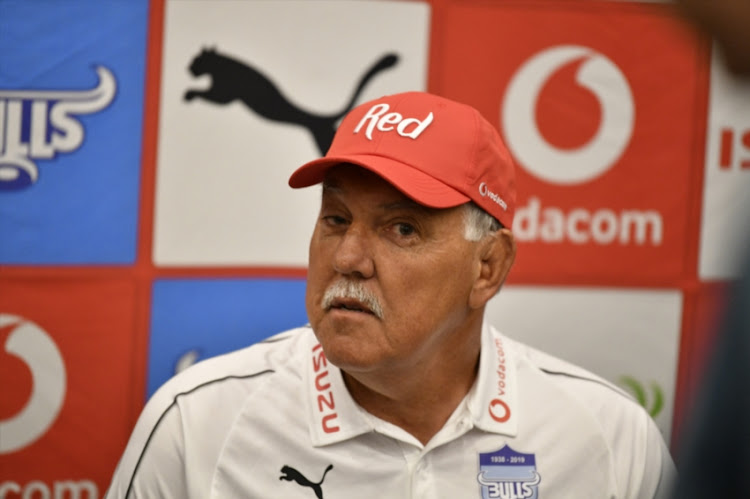 Bulls coach Pote Human was at a loss for words to describe his team’s last 10-minute meltdown that saw them surrender a 10-point lead to lose by two points against the Jaguares at Loftus on Saturday.

The Bulls had loose-forward Tim Agaba and Conraad van Vuuren yellow-carded in the frenetic closing session as the Bulls cascaded to a 22-20 loss through Domingo Miotti’s dream debut that saw him score two late tries and a conversion.

“I really think we had them. They had one opportunity to score in the first half and they used it while we had so many opportunities that we had and didn’t finish. Then there was the disciplinary matter that cost us because you can’t play with 14 and 13 men against these guys. It was the stupidity of the players. We have to rectify that and come back harder‚” Human said.

“It’s a huge disappointment and huge setback for us because I really thought we had this game but we let it slip.”

Human was correct in his assertion that this side should have wrapped up the game early but the last two tries scored by Miotti had suspiciously forward passes that were not picked up by referee Brendon Pickerill.

Pickerill didn’t have the best of games and his officiating was blighted by inconsistencies with scrum calls.

Human though avoided criticising the match official‚ there was a also a deliberate knockdown that Pickerill also missed.

“That’s rugby and those decisions are part of the game but I also thought those two passes were forward but they got away with them so good luck to them‚” Human said.

Jaguares coach Gonzalo Quesada had difficulty hiding his delight in what was the Jaguares’ first Super Rugby win in Tshwane.

They absorbed pressure well and there was a resourceful performance that taught the Bulls a lesson in making the most of opportunities.

Significantly‚ they’ve completed a season double over the Bulls after beating them in Buenos Aires earlier this season.

“When we were 9-7 down at half-time‚ that was the first big merit of the team because we were still in the game. We did not give up after being down 20-10. In those last 15 minutes‚ we had our opportunities and the character that was shown by the team isn’t something we’re used to‚” Quesada said.

“We used the little opportunities we had to create momentum to go for the game and maybe‚ it was the only opportunity we had to play the way we normally play. I’m proud of the guys. At times we can play better than what we did but we needed a win. A win is a win.”