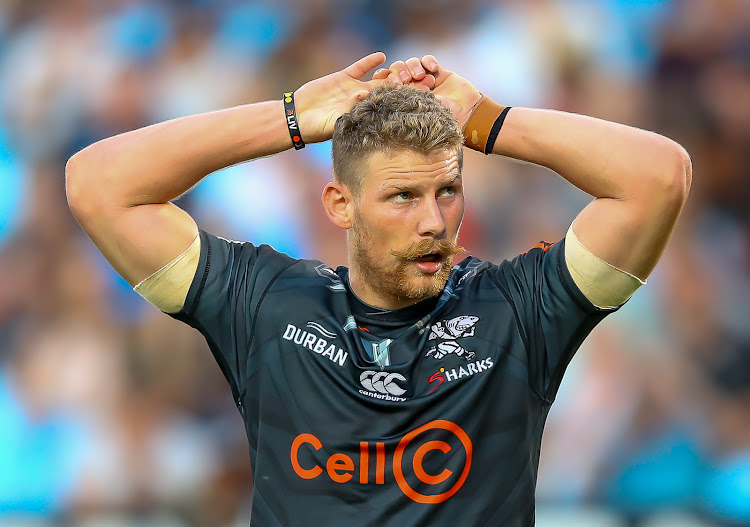 Robert du Preez of the Cell C Sharks after a try was scored by the Vodacom Bulls during the Super Rugby match between Vodacom Blue Bulls and Cell C Sharks at Loftus Versfeld on March 09, 2019 in Pretoria, South Africa.
Image: Gordon Arons/Gallo Images

Sharks coach Robert du Preez has opted to stick with his namesake son at flyhalf while Curwin Bosch and Aphelele Fassi swap places at fullback for Friday's Super Rugby date against the Lions at Ellis Park.

Tactically‚ he was off-colour but detrimentally for the Sharks‚ he fluffed his lines from the kicking tee and missed a crucial and straight-forward tackle on Bulls inside centre Burger Odendaal that led to outside centre Jesse Kriel's try.

In an unedifying match of small margins but greater log importance‚ Du Preez was found wanting but the coach has shown confidence in the pivot.

The confidence though can't be misplaced as the Sharks have yet to win a South African Super Rugby derby this season.

In their defeats to the Stormers and the Bulls (two)‚ they've been outmuscled in no uncertain terms.

This has stunted their backline that has some very good players and Du Preez‚ who is leaving the Sharks at the end of the Super Rugby season to join the Sale Sharks‚ has gone missing in those defeats.

Coach Du Preez said Bosch had to start at some point but said they play good rugby against the Bulls without the scoreboard reward.

“Curwin was due for a start and at the beginning of the year‚ he had a couple of niggles and concussion. He never got going early on‚” Du Preez said.

“It doesn't get any easier and it's a tough assignment in Johannesburg. It's always tough up there but we're very positive and although we won everything but the match on Saturday‚ there were some fantastic positives we took out of the game. We'll take that type of momentum. In the first game against the Bulls‚ we were outplayed and against the Stormers‚ we lost the physical battle but against the Bulls‚ I thought we played some outstanding rugby.”

Van der Merwe earned himself a three-week cooling off period for his role in the brawl with his Bulls counterpart Schalk Brits.

Van der Merwe and Brits were both sent off but the Sharks have been forced to start with Kerron van Vuuren at hooker with the talented Fezokuhle Mbatha on the bench.

Du Preez said Van Der Merwe's loss was a big one but the youngsters in place have an opportunity to step up.

He also added that he's focussed on his job in ensuring that the team wins.

“We do have some good depth with the youngsters that are in the system and Kerron has done some really great work for us. A young guy like Fez has really been great for us but it's always tough to lose a hooker of Akker's calibre. We've also lost Craig Burden but we're good for now but these guys have to step up. It's a good opportunity for both of us‚” Du Preez said.

“However‚ I've got a job to do‚ that's to make the team win and that's what we need to concentrate on this weekend. I can't be bothered by sideshows.”