Southern Kings on a tightrope with PRO 14 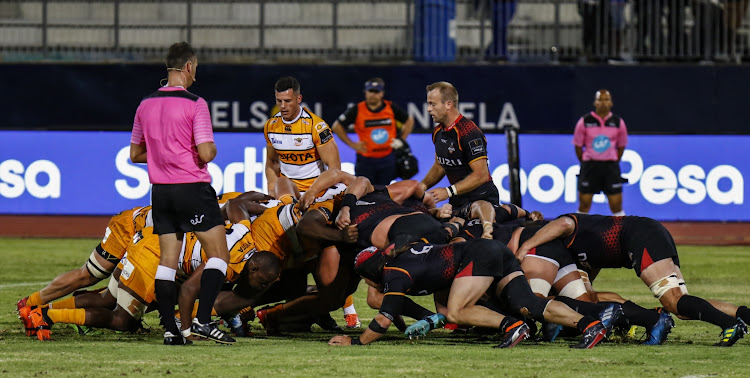 A scrum during the Guinness Pro14 match between Isuzu Southern Kings and Toyota Cheetahs at NMMU Stadium on January 18, 2019 in Port Elizabeth.
Image: Michael Sheehan

The Southern Kings will look to drastically improve performances next season to ensure their PRO 14 survival by signing a few high profile players and bolstering the coaching staff.

That’s according to Loyiso Dotwana‚ chairman of The Greatest Rugby Company in the Whole Wide World (Pty) Ltd (GRC)‚ which bought a 74% stake in the Southern Kings for approximately R45m‚ last month.

Dotwana and several associates have vowed that they are invested for the long-term to create a world-class team in Port Elizabeth.

But he is also realistic enough to know that short-term improvement is vital.

“There is an expectation that we will throw money at a whole bunch of marquee players. But that’s not the case‚” Dotwana told TimesLIVE.

“Obviously we are looking for a few big names to bolster the side‚ but the plan is steady growth and improvement.

“The PRO 14 organisation has raised concerns about the Southern Kings’ performances and value to the tournament.

“We are on a tightrope with PRO 14 and we will respond to those challenges in a positive way. So we will recruit some good players in the short term to improve our quality.

“Also‚ coach Deon Davids hasn’t had the right support so we will help him by employing some new assistants and expertise.”

Although the long-term plans centre on a strong feeder through a high performance academy under Robbie Kempson‚ the Kings also want to attract good senior players now and rebuild their relationship with the Nelson Mandela University and help it return to the Varsity Cup.

GRC is only invested in the Kings franchise and that’s the way they want to keep it. Funding the EP Rugby Union is not an option at all.

“The first decision we made‚ which is significant‚ was to invest in a professional team and a high performance academy – nothing more at this stage‚” Dotwana said.

“We have limited and ring-fenced our involvement to the high performance set-up.

“Ultimately rugby franchises (clubs) like the Kings should be 100% owned by private equity. That’s the way professional sport is going and what we should be doing.

“Those looking for a quick fix are going to be disappointed‚” Dotwana said. “In the coming year we want to build a foundation to be sustainable in the long run. As investors we are not in this for three years‚ we are in this for a long time.”

And to prospective recruits Dotwana promised a good experience for a player with the right mindset.

“My message to players about coming to the Kings is simple‚” Dotwana said.

“Firstly‚ we are an ambitious team and we are putting together the necessary human and financial resources to meet that ambition.

“Secondly‚ we are going to instil a high level of accountability across the board because the goal is to be a high performance franchise.

“Lastly we want to have fun within that framework. If a player subscribes to those principles they will be very welcome here.”