Lions limping with several players in the sick bay 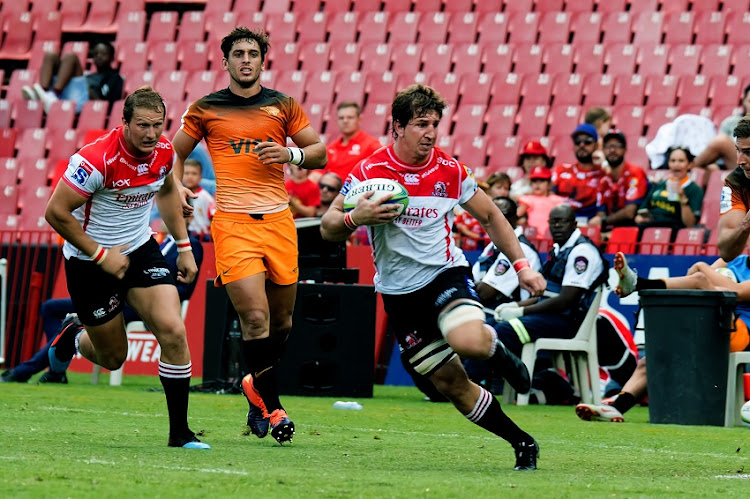 Kwagga Smith of the Lions during the Super Rugby match between Emirates Lions and Jaguares at Emirates Airline Park on March 09, 2019 in Johannesburg, South Africa.
Image: Wessel Oosthuizen/Gallo Images

The Lions’ superb second half effort that helped reel in the Melbourne Rebels has taken its toll with Kwagga Smith‚ Dylan Smith‚ Vincent Tshituka and Andries Coetzee all joining the injured list.

They were all required to play out of their socks in the Lions’ remarkable 36-33 win at Ellis Park but now they are out of the team to play the feisty Sunwolves in Singapore on Saturday.

The prognosis is far from rosy.

The injuries to the loose forwards are particularly untimely as regular captain Warren Whiteley and flank Cyle Brink still count among the convalescing.

“Dylan Smith is out for eight to 12 weeks‚” said team doctor Rob Collins.

“That involves bone that has to heal here on the outside‚” he said pointing to his face.

“The soft piece of the cheek is broken.

“Kwagga should be out for six weeks‚ but he is a quick healer. It might be quicker than that.

"Andries will be able to play the next game. Vincent’s ankle should take about four weeks. Dillon Smith (scrumhalf) who injured his hamstring in training last Friday will be out for four to six weeks.”

The Lions will be thankful they have a bye next week before they take on the Sharks on Friday 4 April.

Although Whiteley’s recovery has moved swifter than anticipated he will miss that game.

“It’s quite a major injury. It’s a pec (pectoralis) major which is the big one in the front.

"That is divided into three parts and one part of that has torn muscle from the tendon. He is getting the strength back very well and he is recovering very well. I’m happy with him.

Despite the sudden surge of casualties Collins says there is no cause for alarm.

“The number of guys out now compared to most seasons is about the same‚" Collins said.

He said tighthead Jacobie Adriaanse has come through his concussion protocols and is ready to play.