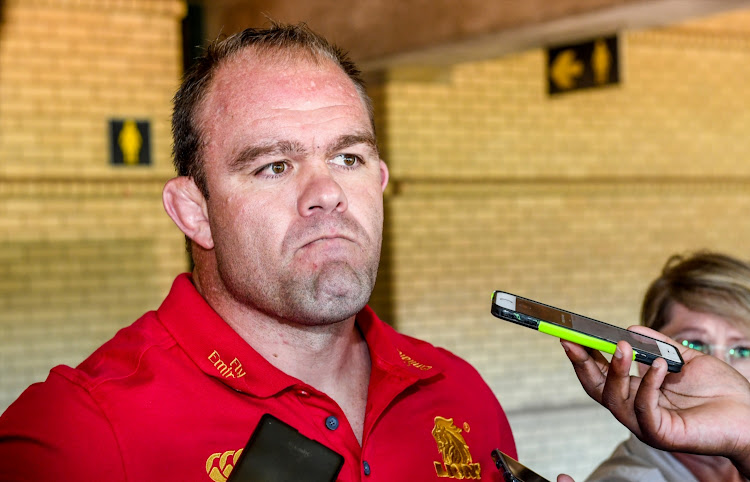 He agrees the dynamics have changed.

The grunt‚ however‚ Philip Lemmer insists‚ still resides in the Lions pack.

The team’s forwards coach ran the rule over his charges performances in the first two Super Rugby matches of the season‚ an exercise that would be rendered futile if one lost sight of the defections the team’s pack has suffered over the last two seasons.

“We lost some mauling type of forwards who like to grind. Now we have younger guys who are more agile and who are quick in the air‚” said Lemmer.

The defections have‚ however‚ opened the door for others who want to establish and re-establish themselves.

The dearth of quality props in the franchise meant the Lions had to look elsewhere and in Carlu Sadie they found a loan player from the Stormers that more than fits the bill.

“It is easy for a guy like Carlu if he comes with the right mindset‚” said Lemmer after impressive back-to-back performances from the young tighthead.

“From day one his character was awesome. So far he’s been really good for us.

“If he keeps going the way he’s going he’ll play at a high level. We often see it with youngsters‚ the moment they think they’ve made it‚ their behaviour changes.

"The way he scrums‚ his body shape‚ his posture and the way he moves around the field. He’s still very young‚” Lemmer cautioned.

In lock Stephan Lewies they got a player from the Sharks who has experience but who may be short of a gallop and as a result‚ confidence.

Mostert’s defection potentially cut the Lions’ aerial threat at the knee‚ but reaching high is one of Lewies’ strengths.

“Before Stephan came here we were definitely the shortest line-out‚” admitted Lemmer.

“There were teams way bigger than us but luckily in the line-outs you can manipulate the spaces where you want to use it.

"So far we have a 95 percent success rate. We pride ourselves in our line-out‚ it was key to us last year.”

On Saturday the Lions had better reach for the stars in that department.

They will face a Bulls line-out that is yet to concede possession on their throw in Super Rugby this season.

“Their jumpers are quality‚” nodded Lemmer.

“Stephan has made a massive difference to our line-outs however. We are not changing anything whether Lood (de Jager) plays or not. We have a set system. We don’t care what the opposition presents.”

Over the last few years it is that unshakable confidence that has helped establish the Lions as the foremost franchise in South Africa.

Consecutive derby defeats however‚ will place their status in grave peril.

The Stormers have confidence after last week’s narrow 19-17 win over the Lions at Newlands‚ but they will need more than that this weekend against ...
Sport
3 years ago

Why Sharks outside centre Lukhanyo Am is happy with himself

Sharks outside centre Lukhanyo Am isn't the type who makes his presence felt.
Sport
3 years ago
Next Article