Why Sharks outside centre Lukhanyo Am is happy with himself 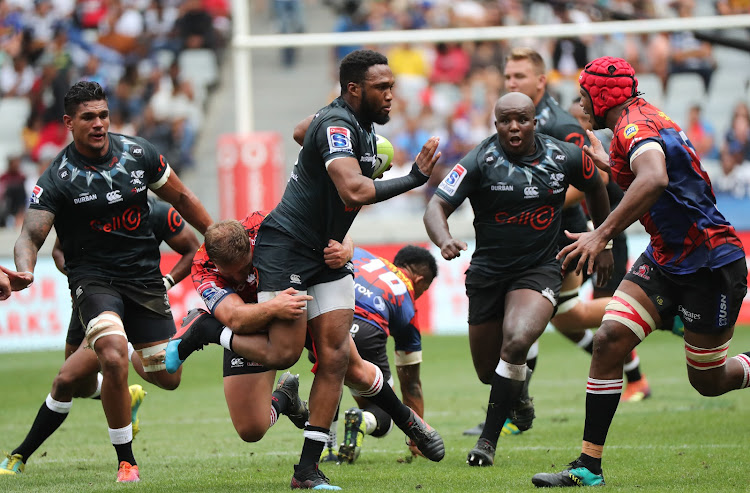 Lukhanyo Am of the Sharks tackled by Pieter Jansen (l) and Marvin Orie of the Lions (r) during 2019 SuperHero Sunday game between the Lions and Sharks at Cape Town Stadium on 3 February 2019.
Image: ©Gavin Barker/BackpagePix

Sharks outside centre Lukhanyo Am isn't the type who makes his presence felt.

However‚ his performances‚ that normally speak for themselves‚ make him an unavoidable presence.

It's not often that a South African midfielder outshines his New Zealand counterparts but that was the case on Saturday at King's Park when Am got the better of Sonny-Bill Williams and TJ Faiane.

The Sharks collected a bonus-point 26-7 win‚ a second consecutive win and one that puts them in great stead ahead of this weekend's crunch game against the fluctuating Stormers at home.

Am though is all about the team and how they need to improve for their first South African derby.

“There's a great energy in the team and it involves everyone from numbers one to 15 and that puts us in a great position.

"The tournament may only be two weeks in but I'm in great shape and I'm happy with myself‚” Am said.

“Things are working out pretty well but we know we have our roles to fulfil as a team and we know we've got a good back three.

"We back all the decisions they make on the field. It's nice having an exciting back three that we have.”

The wins against the Sunwolves and the Blues may have been contrasting‚ but the Sharks have 10 points to show for their early tournament efforts.

The Stormers were belted by the Bulls in their first game but somehow they found a way to get past the Lions on Saturday.

The Sharks haven't quite hit their straps yet this season but no team can claim to be in top shape after two matches.

The unpredictable nature of South African derbies means the Sharks can't take the Stormers lightly despite their off-the-field troubles and their general lack of tactical direction.

Am said their start has been good but the heavy parts that make up the Stormers pack have to be respected.

“We couldn't have asked for a better start with two big wins.

"It's a huge confidence booster going into the Stormers game.

"We take things week-by-week and game by game. We're just looking ahead to the Stormers game and I hope we'll come up tops‚” Am said

“The Stormers have a very big pack and a good set of backline players. Rugby in its nature is a physical sport but you need to pitch up in that aspect.”