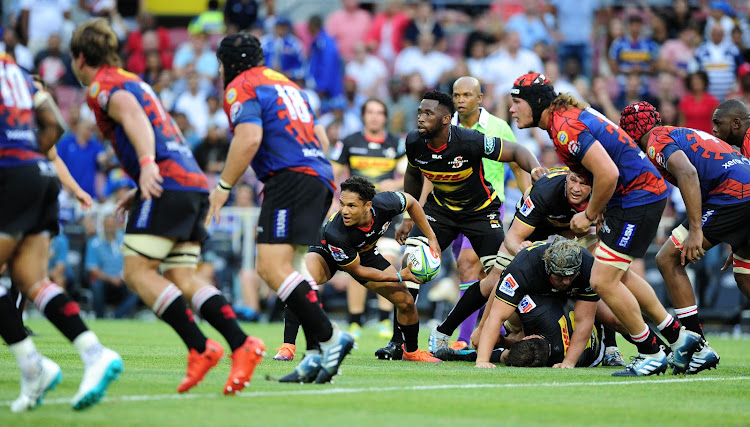 Herschel Jantjies of the Stormers during the 2019 Super Rugby game between the Stormers and the Lions at Newlands Stadium in Cape Town on 23 February 2019.
Image: © Ryan Wilkisky/BackpagePix

The Stormers have confidence after last week’s narrow 19-17 win over the Lions at Newlands‚ but they will need more than that this weekend against the Sharks.

That’s according to assistant coach John Dobson‚ who feels that emotion worked well last weekend‚ but cannot be relied on to pull them through every time.

The Stormers bounced back after losing 40-3 to the Bulls in week one‚ and used that anger to fuel their gritty performance against the Lions.

But away from home against the log leading Sharks‚ it will take a more calculated effort.

“Against the Lions our breakdown and tackle physicality was good and that gives us a bit of confidence‚” Dobson said.

“But because of the circumstances and the pressure we were under after the Bulls game‚ we had a bit of a laager mentality. This week is a bit different as we look to be more accurate.”

The Sharks thrashed the Sunwolves in Singapore in week one and overcame the effects of travel to beat the Blues 26-7 in Durban last week.

After making a fast start the Sharks were pegged back in the latter stages‚ but Dobson isn’t reading too much into that.

“We were a lot happier watching the tape of the Lions game again because we picked up a few things in our analysis.

“We pushed the tempo of the game up in the latter stages‚ our lineouts went from about 35 seconds per set piece into the low 20 second range and that meant we upped the speed of the game.

“We want to have a similar approach for the game this Saturday. We want to play tempo because we saw the Blues got some change for it in the second half against the Sharks last week.

“The Sharks are more of a gain line team than the Lions.

"When they get their offloads going in contact‚ it brings new challenges. They are more direct and have a good kicking game with Louis Schreuder‚ Rob du Preez and Curwin Bosch giving them accuracy.”

Dobson’s warnings about the Sharks’ ability on the gain line and their physicality won’t fall on deaf ears. His players know from experience how difficult the Sharks can be if they win collisions and gain momentum.

It’s something the Sharks don’t hide either. Assistant Sharks coach Jaco Pienaar has warned they’re improving all the time.

“The platform is laid up front and the forwards needs to work hard there to give the backs quality ball so that we can play some rugby‚” Pienaar said.

“One of our strengths at the Sharks is that we have really physical players‚ a big pack of forwards with powerful backs and it’s all about getting the gain-line momentum going and the little things right.

“The Stormers are similar to us in that they have powerful forwards with a great backline that can score from anywhere. They’re a well-rounded team that plays good rugby.”