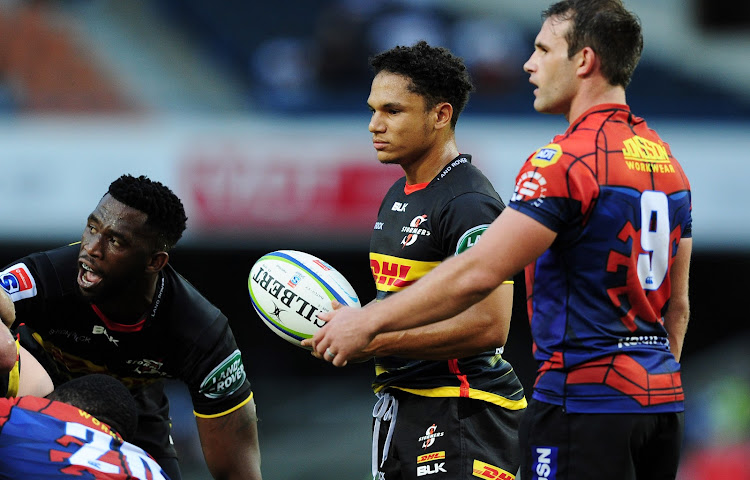 Herschel Jantjies (with ball in hand) of the DHL Stormers scored a try that levelled the scores during the Super Rugby last-minute win over the Emirates Lions at Newlands Stadium in Cape Town on February 23 2019.
Image: Ryan Wilkisky/BackpagePix

Lions coach Swys de Bruin felt his side did enough to win Saturday’s Super Rugby encounter against the Stormers‚ despite falling just short at Newlands.

Stormers replacement scrumhalf Herschel Jantjies sniped over almost seven minutes into injury time for a try that levelled the scores.

SP Marais slotted the conversion to give the Stormers a vital 19-17 win that ended a four-year losing streak against the Lions.

The Lions dominated the first half and led 14-6 at the break as the Stormers conceded nine penalties and a yellow card in that period. But somehow the home side stayed within touching distance.

In the final quarter the Lions had to repel a fierce Stormers onslaught and De Bruin felt they were unlucky not to have been on the right side of some calls that could have seen them through.

“Well done to the Stormers for surviving the Malcolm Marx steals there at the end‚” De Bruin said with a large dollop of sarcasm.

“I don’t know how long you have to steal a ball‚ but that was good from them.

“You can never comment on the refs‚ you have to look at your own faults first.

"They are human and Egon was a great player and he understands the game‚ so it would be totally unfair for me to comment on his performance.”

When reflecting the Lions coach admitted that his side might have put the contest out of reach by halftime in a hugely one-sided first half.

“We should have used more of our chances in the first half perhaps‚” De Bruin said.

“But I also believe we did enough to win the game at the end. But you could say we should have done more with out chances in most games.

"It’s so disappointing because at halftime I thought we had been tactically smart and played well.

“We knew they would come with everything after what happened at Loftus (The Stormers lost 40-3 to the Bulls in week one). We were ready and prepared.

“But congratulations to Robbie and his team‚ fighting right to the end.

"That was good for them. I’m glad for Fleckie. I spoke to him before the game‚ there is lots of pressure on him so for his sake I’m glad.”

De Bruin said it was too early to know the full extent of the injury but he was concerned.

“He’s so passionate. It was so bad for him and us that he went off.

"You should have seen his emotion. He’s so full of passion. But I’m still proud of guys like Elton [Jantjies] and Kwagga [Smith]. The leadership was good.

“We will find out about the seriousness of the injury. It doesn’t look positive. We hope it will be alright. We will have to see.”

The Sharks registered a gutsy 26-7 bonus point win over the Blues at King’s Park in Durban on Saturday afternoon for their second Super Rugby win in ...
Sport
3 years ago

What this scrappy contest lacked in skill and composure it made up for in drama as Stormers scrumhalf Herschel Jantjies scored after seven minutes of ...
Sport
3 years ago
Next Article