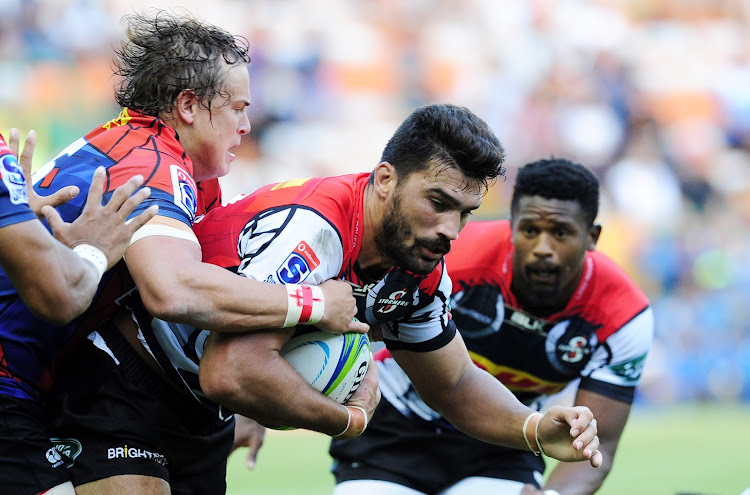 Damian de Allende of the Stormers is tackled by Andries Coetzee of the Lions during the 2019 Super Rugby game between the Stormers and the Lions at Newlands Stadium in Cape Town on 23 February 2019.
Image: © Ryan Wilkisky/BackpagePix

What this scrappy contest lacked in skill and composure it made up for in drama as Stormers scrumhalf Herschel Jantjies scored after seven minutes of injury time to ensure victory for the home side.

Wing SP Marais still had to convert with the scores locked at 17-17, but from under the sticks, it was a formality.

The win ended a four-match losing streak against the Lions and also gave under-pressure coach Robbie Fleck some breathing room after last week’s thrashing at Loftus.

While the result was all that mattered for now, it’s impossible to say if the Stormers have turned the corner, or whether this was just a temporary positive blip.

The Stormers should have sealed victory earlier after dominating the final quarter. But their old problems of composure in the red zone resurfaced and it was only Jantjies’ awareness and pace that saved the day.

The little halfback broke after a ball from a scrum five metres from the Lions line spurted out the back of the Stormers’ set piece. Jantjies gathered the ball and spotted an opening to race in under the posts for the Cape side’s first try of the season.

At halftime though, it looked like the Stormers were out of it.

The Stormers conceded an avalanche of penalties, which inevitably resulted in a yellow card just before halftime.

Prop Ali Vermaak received his temporary marching orders for hitting an opponent from the side of a ruck – his second similar infringement of the match.

The Stormers gave away nine first half penalties and as a result spent more time pinned inside their half. But they hung in there in a match that was painful to watch for the most part.

The Lions made the most of the largesse the Stormers offered scoring two first half tries through flank Kwagga Smith and No 8 Warren Whiteley. Both tries were from close range drives after multiple phase build-ups.

Other than that though, the Lions were not impressive either making 10 handling errors. The overall impression was not positive. This was not a good advertisement for South African rugby.

After the break the Stormers managed to gain more possession and as a result make the Lions defend for longer periods.

They even managed the first 10 minutes of the second half well while Vermaak was in the sin bin, ‘winning’ the period 3-0 as wing SP Marais slotted a penalty to add to his two first half strikes.

Initially the Lions held the edge in scrums but as the game wore on, the Stormers started to edge that skirmish and earned a couple of crucial penalties that shifted the momentum the home team’s way.

Bok hard man Eben Etzebeth was reintroduced to Super Rugby after nearly two years midway through the second half and his presence lifted the overall intensity of the contest and roused his teammates.

The Lions were clinging on at the end and repelled several Stormers lineout drives close to the line after Elton Jantjies had extended the lead to five points with a third penalty 17 minutes from time. It wasn’t enough though as the Stormers found a way.