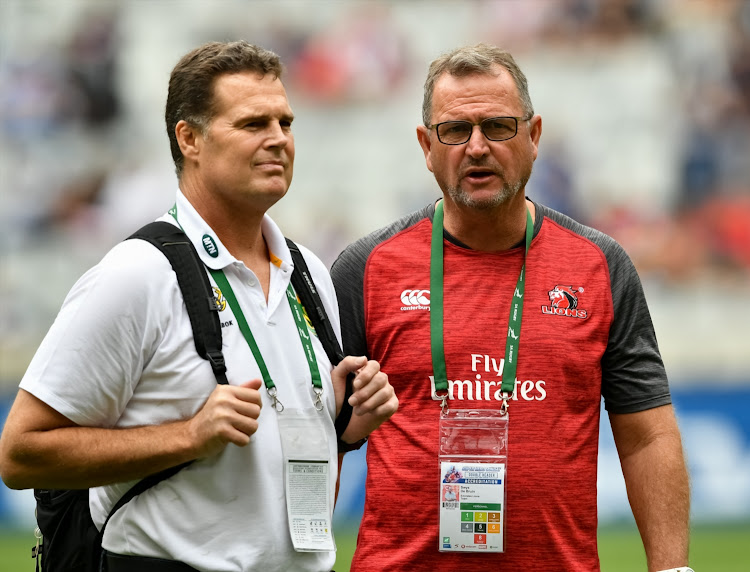 The Springboks head coach and director of rugby Rassie Erasmus (L) and the Emirates Lions head coach Swys de Bruin have a chat during the Super Rugby Super Hero Sunday match between the Lions and the Cell C Sharks at Cape Town Stadium on February 03, 2019.
Image: Anton Geyser

Coach Swys de Bruin and captain Warren Whiteley lauded the Lions’ resilience on defence after they recorded their maiden win in Argentina over the Jaguares on Saturday night.

The Lions ran out 25-16 winners with flanker Marnus Schoeman dotting down three times for the visitors to help get their campaign off to a winning start.

“Defence always tells me about the players’ mind set and how hungry they are‚” said De Bruin.

“It was wonderful to see. The ball was wet and it was difficult to play an attacking game. We knew we had to back our defence.

“At halftime I again challenged the guys about their defence‚” said De Bruin‚ whose team held a slender three-point lead going into the break.

They took the strategic position not to overplay with ball in hand.

“People at home have to know how greasy the ball was‚” noted De Bruin.

“It was 34 degrees when we ran on and that our defence would have to take over. We tackled them into mistakes that I haven’t seen for a while.

“We couldn’t focus on attack because we couldn’t play. It was one of those games that if you win it you’re just so glad. The guys really showed a lot of guts.”

Whiteley was equally pleased with the team’s performance when they had their backs to the wall‚ particularly in the second half.

“We knew over here it is always physical. It is won upfront and the Jaguares always keep the ball in hand. They are very direct. Their forwards come around the corner and they come hard.

"Particularly in the second half they had a lot of ball and they put us under pressure. We were perhaps lucky to get those turnovers when we did but we showed attitude and resilience‚” said Whiteley.

The Lions’ exacted timely turnovers at the scrum‚ and at the ruck with on loan signing Carlu Sadie playing a strong hand.

“All the debutants played really well when they got on‚” said De Bruin.

“Our youth structures are sound. They really put up their hands. Also a guy like Marnus (Schoeman) who scored three tries‚ is one of those guys when the team pushes his number he comes through.

“Carlu Sadie‚ who was a debutant for us‚ how well did he scrum? I’m very excited but we have to realise this was just the first game and there is still a lot ahead of us.”

Whiteley too beamed about the team’s performance in the scrum.

“We struggled over here the last couple of years. We are really pleased‚ particularly with our scrums. I think we did really‚ really well. We got some crucial turnovers there.”

The Lions did well to roll with the punches and they got their tactics spot on.

“We are really satisfied with the result. It is a shame we couldn’t get a bonus point but we take the win‚” sighed De Bruin.

Pieter-Steph du Toit was deservedly named 2018 SA Rugby Player of the year on Thursday following a stellar season last year to become only the fifth ...
Sport
3 years ago

Bulls coach Pote Human is being true to his word by building on the foundations John Mitchell laid during his short stay in Pretoria last season.
Sport
3 years ago
Next Article