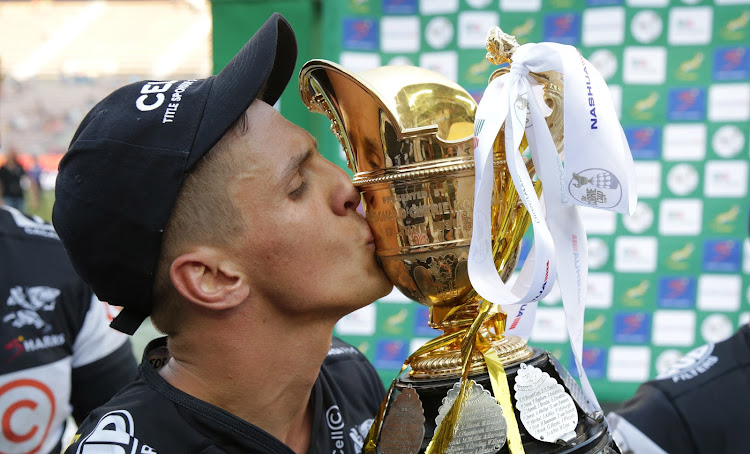 Louis Schreuder of the Sharks celebrates with the 2018 Currie Cup trophy in October.
Image: Chris Ricco/BackpagePix

Newly appointed Sharks Super Rugby captain Louis Schreuder says they have a score to settle with Super Rugby this year after their underwhelming display in 2018.

Last season the Sharks flattered to deceive for the better part of their campaign and narrowly scraped through to the play-offs.

They found themselves having to travel to Christchurch for a quarter-final date against eventual champions the Crusaders.

They were handsomely beaten 40-10 by Scott Robertson's charges‚ who went on to beat the Lions in the final at home two weeks later.

The Sharks finished third in the five-team South African conference and eighth overall. That left them with the arduous trans-Indian Ocean trip and they came back with their tails between their legs.

“Last year was a let-down and this year we want to make the play-offs but not only just stop at quarter-finals.

"Also‚ playing the Crusaders was a bit of a tall order for us as a young team.

"This year‚ we want to take it a step further and I think we have the squad and the team to do so‚” Schreuder said.

The Sharks though have the confidence of entering this year's competition on the back of being Currie Cup champions.

While being domestic leaders hasn't always translated into Super Rugby success‚ the Sharks are intent on harnessing whatever momentum that remains from their final win against Western Province in October last year.

Schreuder said their triumph at Newlands did the young squad a world of good.

“It was good for a young squad like ours to win the Currie Cup.

"Lwazi Mvovo and I were the oldest in the team.

"We are a young squad and we are learning. It was very good for us‚ especially with the fact that we won away from home and being the underdogs‚” Schreuder said.

“The guys have grown and they've taken a lot of confidence and growth and if it's taken into Super Rugby momentum-wise‚ it's going to be very good for us.”

The Sharks veered from spectacular to turgid during their topsy-turvy campaign last year.

One thing they didn't depart from was their off-loading game that was brilliant when it came off in the right conditions. It hasn't always worked in humid Durban where the ball became difficult to handle‚ but Schreuder said they won't be changing much from what worked last year.

“We've got the same approach and we want to play exciting rugby for our fans and the public.

"We're working very hard and the weather isn't making things any easier for us. We are trying to get as fit as possible and ready for the season‚” Schreuder said.