Into the melting Pote: New Bulls coach wants to do things his way 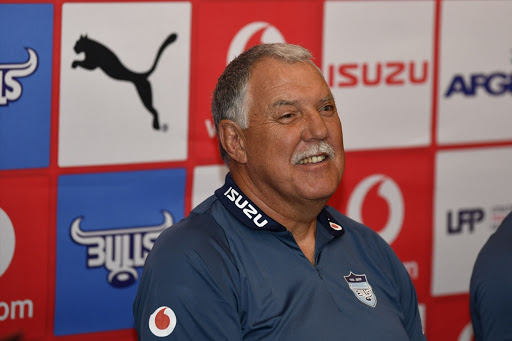 As he faced the media for the first time as Super Rugby head coach for the Bulls next season, Pote Human showed little emotion.

In his trademark soft-spoken voice, the experienced 59-year-old Human did not give away much as he responded to most of the questions with short but calculated answers.

Looking ahead, Human said he would do things his way.

“I have worked with guys like Heyneke and Mitch [John Mitchell] last year and I will take that experience forward. I will be myself because I can’t be Heyneke Meyer; I am Pote Human and I will do it my way. We will definitely train like we did last year, the players were excited before Mitch left to say this is the best way to go forward,” he said.

Human immediately set himself a target of at least reaching the play-offs next season, something the Bulls have failed to achieve in the past five years.

“The target will be to firstly make the play-offs. If you get to the quarter-final stage, you are almost there and there is 50-50 chance of getting to the final,” he said when asked what would be rated as success for his first campaign in charge of the team.

Human also admitted that he has always wanted to test himself at this level, with the mammoth responsibility of coaching the Bulls in Super Rugby - but he was in shock when the news was delivered to him on Monday night.

“I was always hoping to get the job and I heard officially on Monday. I am still in shock but I am really happy and I have to make it work.

"It is a privilege and honour to be announced as the head coach of the Bulls, I have come a long way with the Bulls since 2005. I went away and came back and this is a great honour to be given this responsibility. I know it is a big task, I know that our priority is to win rugby matches and fill Loftus. I know that we have a good squad, the players are hungry for success and we want to make it work.

“Last year we played good rugby but we didn’t finish well and kick the ball better. If we play better from turnovers, I really believe that we have the players to do well and I hope we can make everybody proud.”

Strauss said the union was backing Human to be successful.

“We are setting up Pote to succeed and we really bend over backwards in terms of accommodating him with assistance and to other consultants he might need. Next year is an important year for the Bulls. We are coming out of the leanest years of the rugby union and we must turn that around drastically in terms of results,” said Strauss.

The Blue Bulls have confirmed the appointment of Pote Human as head coach for their Super Rugby and Currie Cup campaigns next season.
Sport
2 years ago

The SA Human Rights Commission will conduct a formal and public inquiry into allegations of racism at SuperSport, and will investigate the ...
Sport
2 years ago
Next Article