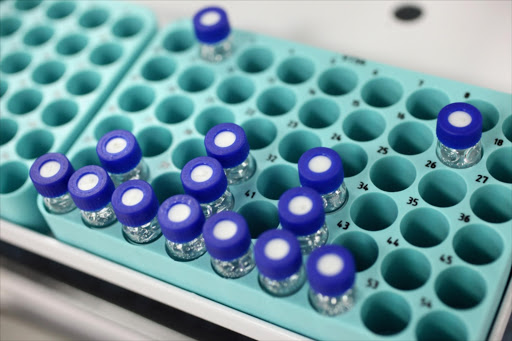 A tray of samples in the anti-doping used in the UK anti-doping syndicate. File photo
Image: Supplied

More alarmingly‚ in most cases‚ the drugs were consistent with the type used by bodybuilders. In other words a cocktail of anabolic steroids taken via injection.

That type of drug cannot be ingested accidentally‚ which was one of the more alarming aspects of the report.

On Monday SA Rugby hosted a meeting at Newlands‚ chaired by World Rugby‚ and attended by all key role players‚ with the aim of strengthening doping education for younger players‚ their coaches and parents.

SA Rugby does not have the jurisdiction to administer doping Test outside of its annual Under-18 and Under 16 tournaments‚ which is why education of schoolboy coaches and parents is vital.

World Rugby’s Anti-Doping General Manager‚ Mike Earl‚ said he was delighted with the outcome of the groundbreaking meeting in Newlands.

“The clear commitment to furthering research‚ education and promotion from all around the table will ensure the prioritisation of this key aspect of player welfare and development for young players into the future”.

Clint Readhead‚ the Senior Manager for the Medical Department of SA Rugby‚ emphasised the importance of starting with education and awareness from a young age.

“It is so important that players‚ coaches and parents educate and inform themselves about the dangers with respect to doping and the risks regarding the use of supplements‚” said Readhead.

“Not only is doping cheating and against the spirit of the game‚ a positive test will also have a huge impact of your future involvement in the game. It starts with taking anti-doping seriously.”

Although all avenues in the battle against doping are welcome‚ there is a long way to go.

That would narrow the window for doping offenders.

“While we will increase our testing‚ we are really putting resources into our investigations‚” Galant said.

“We’re going to do more raids and make more arrests [of those who are supplying the drugs]. The NPA [National Prosecuting Authority] needs to prosecute more of these cases.

“The Schools Act allows for drug-testing‚ but sports drug-testing has to be initiated by the headmaster‚ who can only do this on suspicion.”

Galant also revealed that testing was expensive‚ which limited the amount of tests the organisation is able perform.

“Then we have to pay the sample collection officers and the courier costs.

"Two of the positive tests this year required a confirmation test. If you add it up‚ it comes to about R4‚500 a test.

The minute a boy contests the test and pleads not guilty‚ we go to a tribunal and that’s another R20‚000‚ which is what it costs to prosecute him.”