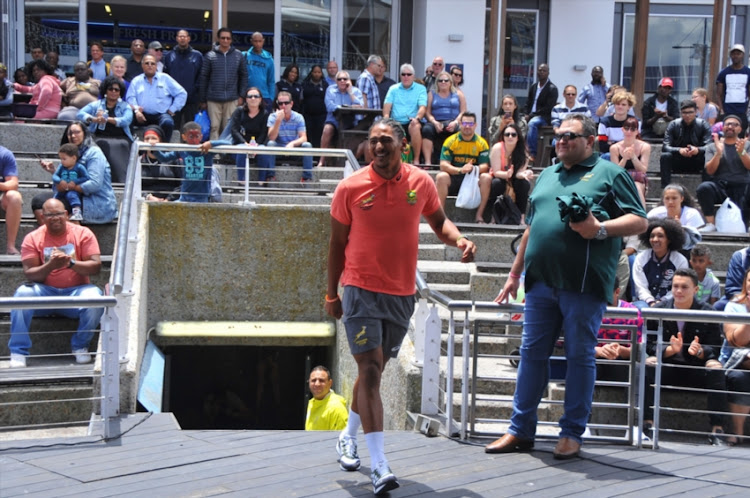 The Blitzboks were boosted by the news that kingpin playmaker Justin Geduld passed a fitness test and will play in the Cape Town leg of the of HSBC World Sevens Series this weekend.

Geduld sustained a knock to the head in the season-opening Dubai tournament last week‚ and has been going through concussion protocols all week.

He sat out training on Tuesday but was included in a defensive session on Thursday and after more medical checks‚ was declared ready.

With a win crucial to the Blitzboks to ensure they don’t fall well behind early pacesetters New Zealand‚ who won in Dubai‚ having the best possible squad was vital.

The Blitzboks have gone into the season without a host of regulars who helped win back-to-back World Series titles over the past two years.

Despite last week’s disappointing sixth-place showing in Dubai‚ coach Neil Powell has kept faith in the squad that did duty‚ believing they will be better this week.

Powell named the same 12-man squad to front up in the Cape Town Stadium on Saturday.

With Geduld back‚ Selvyn Davids will again be the official replacement. “I was pleased with the performances against Scotland and Fiji‚ our last two matches last Saturday‚ and I saw more of that fluency and urgency in training as well this week‚” said Powell.

“Knowing the players‚ they will all be desperate to correct last weekend's disappointments and they get a chance to redeem themselves this week.”

Powell called in Chris Dry and Mfundo Ndhlovu to train with the Blitzboks this week‚ but was happy to tackle Pool A opponents New Zealand‚ Samoa and Zimbabwe with the same squad.

“We have learned lessons from last weekend‚ but that is also true for the other teams in the tournament‚” said Powell.

“Everybody knows a little more of each other than was the case last week‚ so it will be tougher to break down defences‚ no doubt. That said‚ we know we can only improve from last week and that is a nice prospect.”

Powell said the focus remains on the first match against Samoa at 12h27 on Saturday.

“We had a tough battle against them in Dubai and this time it will not be different‚” said Powell of their Pacific Island opponents‚ who were beaten 19-12 by the Blitzboks last weekend.

“They are a very physical side with some big‚ fast players and we will have to be very sharp for our opening match.”

The Springbok Sevens squad for the HSBC Cape Town Sevens: