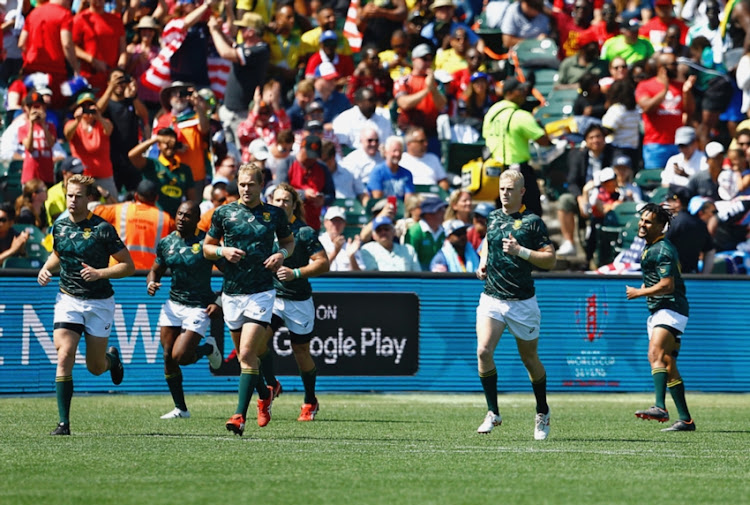 Philip Snyman of South Africa (3rd L) leads out the players during the Men's match between South Africa and Scotland on day 2 of the Rugby World Cup Sevens 2018 at AT&T Park on July 21, 2018 in San Francisco, United States of America.
Image: Martin Seras Lima/Gallo Images

The Blitzboks have their own issues with patchy form and some inexperienced personnel‚ but they will be relieved that main Pool A rivals New Zealand are also struggling.

Despite winning the season-opening Dubai leg of the 2018/19 HSBC World Sevens Series last week‚ the Kiwis have been shorn of several key players for this week’s second leg in Cape Town.

New Zealand have been forced to call up three replacements after a high casualty rate in Dubai.

Trael Joass‚ Etene Nanai-Seturo and Taylor Haugh have joined the team after Kurt Baker‚ Jona Nareki and Akuila Rokolisoa all sustained injuries before the Dubai event kicked off. Sam Dickson‚ Scott Curry and Regan Ware picked up injuries during the tournament.

While NZ’s resources will be stretched at the Cape Town Stadium in a tricky Pool that also contains Zimbabwe and Samoa‚ the Blitzboks are only waiting on Justin Geduld’s fitness.

The mazy playmaker took a knock in Dubai and is still working through concussion protocols. A late call on his availability will be made closer to the weekend.

After sixth place and only 12 log points‚ 10 fewer than NZ earned for winning Dubai‚ the Blitzboks know that winning their home tournament is almost non-negotiable now.

Blitzbok captain Philip Snyman attended the official captains’ photo on Robben Island on Tuesday wearing the commemorative match jersey‚ which they will play in this weekend.

The special motif jersey serves as a tribute to late president Nelson Mandela's 100th birthday celebrations. Snyman said that would boost their motivation on the field.

"We all celebrate the role Madiba played as the Father of the Nation‚ and this jersey will add to our motivation.

"Similarly to that which our late Mr Mandela envisaged‚ the Blitzboks are a team that want to inspire and give hope to people‚ and to use our abilities on the field to bring the nation together."

Snyman said that deep desire‚ combined with the need to improve on their efforts in Dubai last week‚ will drive them at home.

"We want to play to our potential for ourselves and for everyone out there. That is a given‚" he said.

The expected sell-out crowd will also boost their energy levels‚ said the captain.

"We will be playing in front of 50 odd thousand people each day in the only weekend we get to play in our own country. That is massive for us.

"More importantly though‚ is that we will also be playing with the support of 50 million people‚ and we are hoping to make all of them proud."

Snyman was confident that they would be able to make the necessary tweaks to improve on their sixth-place finish in Dubai.

"Coach Neil Powell has a plan or two up his sleeve and I think we will be very competitive this weekend‚" said Snyman.

"Running out there with the support of the country‚ wearing this special jersey will be a fantastic occasion. We can't wait."