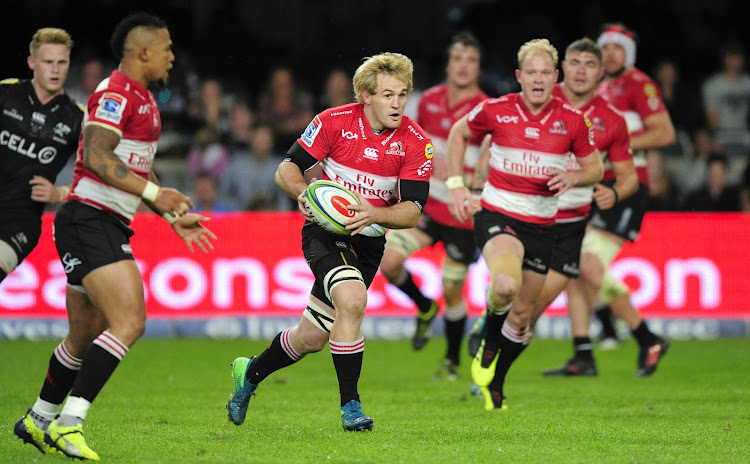 Marnus Schoeman of the Emirates Lions attacks during 2018 Super Rugby game between the Sharks and the Lions at Kings Park, Durban on June 30 2018.
Image: Gerhard Duraan/BackpagePix

South Africa’s Super Rugby franchises will take on an even more comical edge next season when the four teams dress as Marvel Superheroes.

The kit designs will be revealed at a later stage.

“Marvel Super Heroes are among the most loved and recognisable characters in the world‚ very much like local Super Rugby players and clubs‚” said Luke Roberts‚ Retail Director for The Walt Disney Company Africa.

“Whether it’s Spider-Man’s genius and agility‚ Thor’s strength and endurance‚ Captain America’s honour and strategy or Black Panther’s speed and stamina‚ we are thrilled to collaborate with clubs in this year’s South African Conference Super Rugby‚ aligning these character attributes with our own iconic teams.”

SA Rugby chief executive Jurie Roux said this is one of the most exciting developments to the local Super Rugby scene in many years.

“Vodacom Super Rugby has always been about entertainment and providing supporters with something new‚ and in 2019 we will definitely achieve that with this exciting endeavour with Marvel‚” said Roux.

“The global rugby landscape is changing and teams across all continents are trying new things to further raise the interest of fans.

"We envisage reaching new audiences and gaining new supporters for our franchises and the game as a whole in South Africa.”

SuperSport chief executive Gideon Khobane said: “These are great times in sport with innovation pivotal to success‚ which is why SuperSport is thrilled to support the Super Heroes initiative.”

There is also a charitable component with funds raised used to tackle cancer in a partnership with the CHOC Childhood Cancer Foundation.

For every tackle made by a South African player during the 2019 Vodacom Super Rugby competition‚ Vodacom and SuperSport will each donate R50 to CHOC through the #TacklingCancer campaign‚ with the goal of raising R1m by the end of the season.

After making their worst start in five years to an HSBC World Sevens campaign the Blitzboks believe they are under less pressure at their home ...
Sport
3 years ago

The Blitzboks will face arch-rivals New Zealand in Pool A on home soil at the Cape Town leg of the 2018/19 HSBC World Sevens Series next weekend.
Sport
3 years ago
Next Article