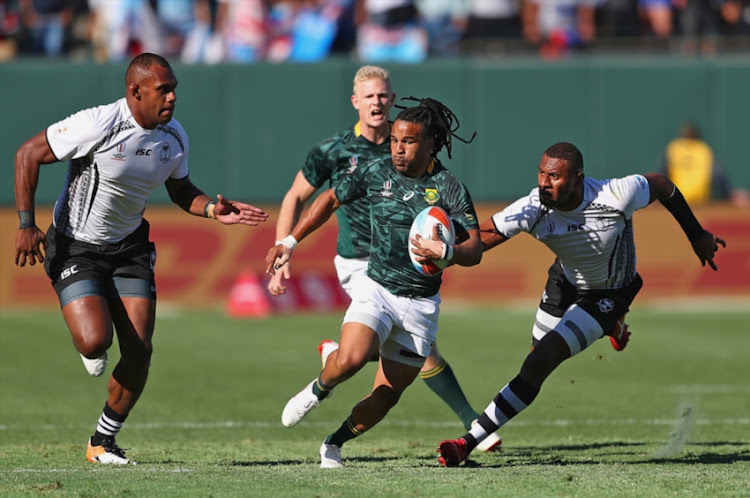 After making their worst start in five years to an HSBC World Sevens campaign the Blitzboks believe they are under less pressure at their home tournament than in previous years.

Finishing sixth at the 2018/19 season-opening tournament in Dubai last weekend has certainly been a reality check for the defending World Series champions after coming to Cape Town as Dubai winners for the past two seasons.

At this weekend’s second leg of the season at the Cape Town Stadium it’s vital for the Blitzboks to make an immediate return to form because they have already lost significant ground to New Zealand.

“Last week was a bad start for the campaign‚ but the coach said it could be something good if he learn from it‚” Blitzbok playmaker Rosko Specman said from the team’s Cape Town hotel.

“There will probably be less pressure on us this weekend because most of it will be on New Zealand and the USA‚ who the finals last week.

“Cape Town is the one tournament we always want to win and I have no doubt we will bounce back positively this weekend.”

Specman picked out some technical setbacks in Dubai last weekend that saw SA win three out of six matches‚ and unusually poor return for the three-time World Series champions.

New Zealand won the final against the USA and earned 22 log points‚ which puts them 10 points clear of SA already.

The two Sevens powerhouses are set to meet in the final Pool game on day one at the Cape Town Stadium after earlier matches against Zimbabwe and Samoa.

“In some games such as against England (in the Dubai quarterfinal‚ which SA lost 22-5)‚ we really battled to get out hands on the ball in the game‚” Specman said.

“England capitalised on the possession and when we defended for three minutes and won the ball‚ we just had no energy on attack when we had a chance.

“If we’re faced with a similar scenario this weekend‚ we have some ideas and I know the coach has been working on a good plan.

“They kicked on single players‚ so we might have to move our pods closer to the isolated player‚ but we will see how we go.”

Specman will also bid farewell to Sevens this as he moves to a permanent fifteens future with the Bulls.

It’s a transition that is not unfamiliar to the Blitzboks who have lost Seabelo Senatla‚ Kwagga Smith‚ Ruhan Nel‚ Tim Agaba and Dylan Sage to the longer version of the sport.