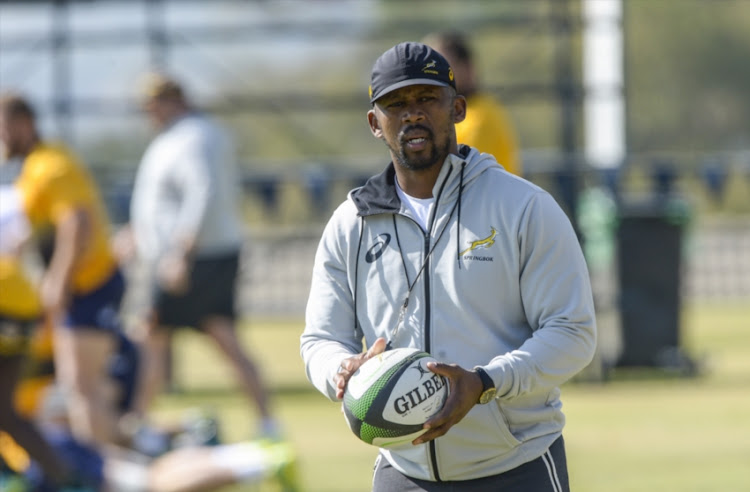 Springbok assistant coach Mzwandile Stick has confirmed in Cardiff that the Springboks would not be experimenting in terms of selections and would pick their best available team to face Wales at the Principality Stadium this weekend.

After consecutive wins against France and Scotland the Boks are looking to continue the momentum they have earned by not tinkering with the team unnecessarily.

Head coach Rassie Erasmus has been consistent with his selections throughout the tour that saw the Boks lose 12-11 to England‚ but beat France 29-26 and Scotland 26-20.

There could be a temptation to pick some fringe players in an effort to deepen the squad’s experience‚ but it appears that winning is trumping fringe player development.

Overseas-based players such as scrumhalf Faf de Klerk and fullback Willie le Roux were not available for the England Test as it fell outside the prescribed Test window.

De Klerk won’t feature this weekend either as he has been released to play for his club‚ Sale.

“The only reason our best team didn’t play against England is that [overseas-based players] Willie [le Roux] and Faf [de Klerk] weren’t available because the match fell outside of the international window‚" Stick said.

“Currently‚ we will take any opportunity to select our best team and I’m sure we will do so this weekend.

“That’s [the reasons for De Klerk’s release] is an argument between Rassie Erasmus and the club.

“We knew when we came on tour that Faf would only play one or two games.

“With Faf being absent‚ it’s a great opportunity for the youngsters. Embrose Papier had a very good game against Scotland and controlled the game very well.

"Ivan van Zyl also had a great game against England. You want to give these youngsters the opportunity to get some experience ahead of the World Cup.”

There was a small boost for the Boks with the news that dead-eye Welsh goalkicker Leigh Halfpenny has been ruled out of the encounter‚ making the tourists’ task marginally easier.

Halfpenny suffered concussion against Australia two weeks ago and hasn’t made as much progress as hoped‚ according to assistant coach Rob Howley.

"Leigh is out‚" said Howley.

"He did some training on Saturday morning‚ and he was still feeling a little bit light-headed.

"It is just a commonsense approach‚ really. A player's welfare comes first. He unfortunately misses out this weekend."

“They’ve been playing the same type of rugby for the past year. When we played against them in Washington we knew what was coming‚” Stick said.

“They have a good balance with their kicking and running game. They’ve got quality players at fullback and Williams is one of them. They will provide us with a big challenge even without Halfpenny.

“It’s going to be a good game. Both teams are in a good space and have been getting better [as the year has progressed]. I have to give credit to our players‚ who have adapted very well to European conditions.”